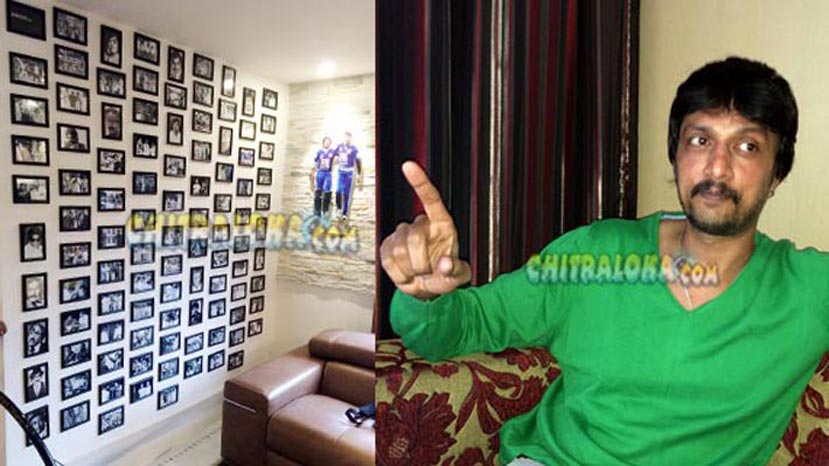 Does Sudeep ever sleep? That is the question even his close friends cannot answer. I am still wondering after so many years of knowing him if he sleeps at all. He is known for working day and night and any time of day or night, he seems to be awake and doing something. When I asked him pointedly if he ever slept, he said, "even I am thinking of findind an answer to this question".

The reason for writing about this is that in the last few years, I have been observing Sudeep is involved in one activity or the other at all times. Many a times I have seen him working nearly 20-22 hours a day. When he was shooting for Maanikya recently, I noticed that during the day time he would be busy in directing and acting. After coming back to the room he used to sit for discussion for the next day shoot and till late night and after that he would sit down for editing! Whereever Sudeep used to go, even his editing suite would also travel!

Sudeep never bothered what the budet was if it helped the quality of the movie. When Maanikya shooting was going on near Mysore he was shooting a fight sequence in an agriculture land. On the backdrop many vehicles were parked including mine which was coming in the frame. Any other director would have waited to clear the background. But Sudeep did not bother and continued the shooting saying he will get it erased in the CG! The reason was the landlord was charging heavily for doing the shooting there.

In my carrer I have seen many directors or producers saying not the shoot with distracting background if it is an important sequence. During the shooting I asked Sudeep whether I could take photos and making videos. He agreed but said I could publish them only during release and not before that. He gives complete trust to everyone, but if they fail in keeping the trust, he will not allow that person near him again.

Many in the industry wonder how Sudeep manages the time. He is now shooting for Ranna. Every Friday and Saturdary he has to travel to Lonvala for Bigg Boss and meanwhile practising cricket and playing the professional Karnataka Premier League! I have heard few of his friends saying Sudeep should have a house near every airport.

I have asked him what he does when there is no shooting or any work activity. Sudeep had said "I will be at home taking rest and watching movies. I am so lazy I won't even change the cloths. I do not go to any family functions. Many times my sister scolds me for not coming to her house!"

Recently Sudeep has got a rest longue built at the top floor of his house. One should see that place to know the taste of Sudeep. This is the place where Sudeep takes part in discussion, meets with friends and relaxes. One interesting thing in that room is a wall full of photos. Once Sudeep had called me and requested to give some rare black and white photos. I did not know why but I had given him nearly 100 photos. When I went to his room I was shocked to see the way he has arranged the photos. He has given the credit to Chitraloka by putting a photo there! If any one stands there he would require not less than 20 minutes to see all the photos. Recently Sudeep spoke about this in Suvarna News Channel.