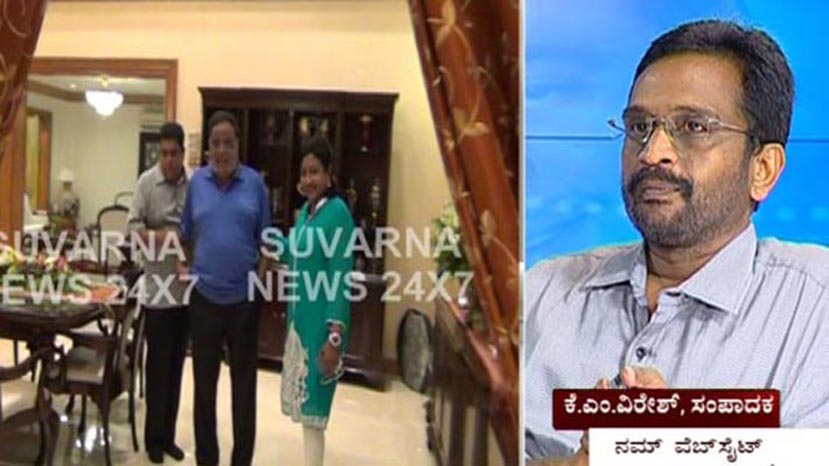 Before leaving Malaysia, I had requested office to arrange a cab for me to pick me from Bangalore Airport. Prakash from office called and informed that an office car was waiting for me. I rushed and got into the car and told the driver to go as fast as he could. Rudrappa, Hoogar, Prakash, Srinivas and others from Suvarna News called up and congratulated me saying it was a fantastic job.

The driver started closing the car window and had switched on the AC. I told him to switch off the AC and open the windows since from the last eight hours I had not smoked! The driver said office HR Ananthram had sent an A/C car for me! I had not eaten anything and told Prakash to get something for me to eat when I reached office.

On my way back to office I started transferring the files from my camera to laptop and started converting it. I saw many Ambareesh fans bursting crackers on the road. Meanwhile many congratulating messages started pouring to my mobile and calls started coming. I could not take all the calls and reply to all the messages.

The driver was so clever and an expert. He reached the office in just 35 minutes. On reaching the office gate I told the security persons to take my baggage and keep it with them and rushed to the second floor. Seeing me many in the office came and hugged me and congratulated me and said our channel coverage was the best of the day!

I handed over the pen drive to Srinivas to transfer the files of Ambareesh's interview. On the TV screen we were seeing how Suvarna News camera was chasing Ambareesh's car from the Airport.

Editor Ananth Chinivar was all smiles and said 'very good work' and CEO Shyam Sunder said, 'Congrats. Well Done'. Suguna had sent a message to me saying that she had taken exclusive interview of Sumalatha. Smart Girl!

Ananth Chinivar told me to sit in the studio for a live chat. I told him I wanted to go home and come back later. When I came home my wife and kids congratulated me.

I returned to office around 2.30 PM. The live programme started at 3 PM. Raghavendra was the anchor. First I saw Suguna interview of Mrs Sumalatha.

I started explaining my experience from the day I left Bangalore to Malaysia and back to Bangalore with Ambareesh. Whenever there was a break I used to go out for a smoke. I heard Raghavendra saying it was difficult to make me sit!

From 4 PM to 5.30 pm Ambareesh was speaking to the media at Ashoka hotel. I think it was one of the best speeches of Ambareesh. This was carried live. After this, I started explaining the journey again. The live programme finished at 6.30 pm.
I received a call from USA. It was from Ranganna of Global Events. He had seen the complete coverage of Suvarna News in the website and congratulated me.

In the evening I went to Press Club of Bangalore. Everyone congratulated me. I had a drink and came back home to write about Ambareesh's return to Bangalore.

I recalled that hours earlier at around 4 PM a friend from another channel had called and congratulated me and said they were waiting for me to upload photos in Chitraloka so that they can pick it from there. Sensing this earlier, I had delayed uploading the story and photos on Chitraloka.com.

Now here it is. The full journey that I can recall and retell my entire life.

Confusion At The Airport Waiting For Ambi - Exclusive - Part 8