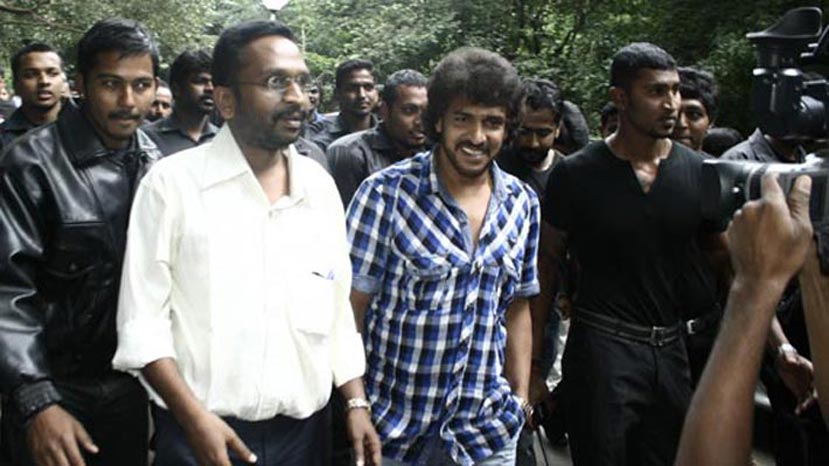 I am very happy that producer Rockline Venkatesh and Madhu Bangarappa, owner of the Akash Audio has finally taken a lead in taking on the might of pirates who were giving sleepless nights to producers and audio companies. Rockline and Madhu have to be complimented for taking deep interest in combating the virus which had the potential of eating our a major chunk of revenue of Kannada films.

There were times just a decade ago when audio industry was giving huge amounts to the producers. And people were willing to go the retail shops to purchase the cassettes and audio albums. Possessing the audio of a successful film was also a matter of pride to many film and music lovers. But unfortunately the economics has over taken the deep interest in growth of Kannada film industry. The cost of manufacturing pirates and distributing it has become so cheaper that nobody wants to go to retail shops and purchase it.

The quality of music has enhanced in leaps and bounds, but unfortunately the CD albums are not selling in proportion to the quality of music. The audio companies are unable to pay the range of money they were offering to the producers earlier. All this because some greedy elements want to produce tainted audios with their substandard equipment and make large bucks of money.

There is another lurking danger that is showing signs of growing very fast and menacingly pointing towards the total destruction of the audio market. There are some websites which are illegally allowing downloading of songs of films that is preventing the genuinely interested film and music lovers and browsers from purchasing musically strong albums. I have seen a number of websites doing this work unabashedly without getting punished for their wrong doing.

A few years ago I told Mohan of Anand Audio about this illegal strategy and he was shocked to see how easily one can hear songs from some websites and how easily the songs could be downloaded. Both of us went to Cyber Police Station to complain these websites, but the Police officer was unconvinced that this was illegal. He however said that he would look into our complaints. At that time the Video Pirates were not included in the Goonda Act.

I was explaining the same thing to many leading producers from that time. Though KCN Chandrashekhar took deep interest in combating this type of piracy, nothing moved further. That is because most of the producers will take an outright fixed amount and happy with it. They did not bother to find out how their musically strong film did not make a big impact in the market. They entirely kept away from the activities to control the piracy and thought that it could be best left to the fate of the audio companies.

I am happy that Rockline Venkatesh and Madhu Bangarappa have emphatically shown the way how to control and contain the audio menace. They have lodged a police complaint against these websites like Kannadaxxxxx.com and other two websites for allowing the browsers to just click and hear and download the songs. Now, they have also formed a squad consisting of even legal experts to take on the might of pirates. Rockline Venkatesh has now taken courage in fighting this big menace. The continuation of such attempts will certainly neutralise the illegal strategy of some tainted websites.