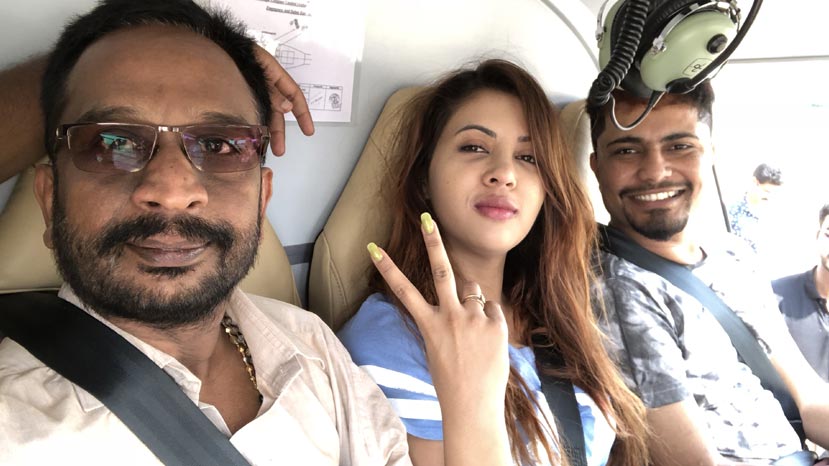 Air travel is not new to me and I have had the opportunity to travel to different countries. But in all these years I never had the chance to travel in a helicopter. This opportunity came this week from Bigg Boss winner Pratham.

Pratham had planned to shoot a scene using a helicopter for his film Nata Bhayankara. He had discussed it with me sometime ago. During the discussion stage itself it was planned to do a Facebook Live from Chitraloka page when the shooting from helicopter took place. The original plan was to fly from Jakkur airport.

Pratham managed to get the helicopter from Shyamanur Mallikarjun and had the schedule planned for the shooting. 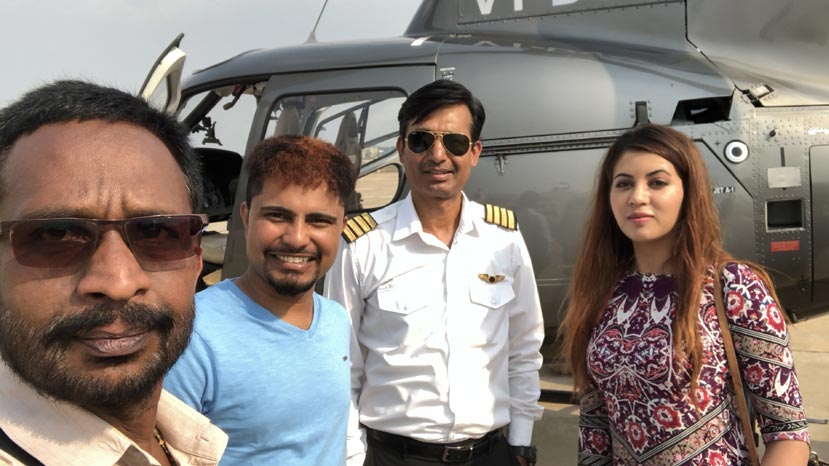 Pratham called me on 28th and informed that the shooting will be held on 29th. I was under the impression that it will be in Jakkur airport and told Pratham I would come to Jakkur in the morning. Pratham then said that the shooting will at Mysore and requested me to come for the shooting. I was shocked when he sent me the documents on my WhatsApp. It was the permission letters from different departments. I was surprised as to how he managed to get the permission from various departments during this time when there is election code of conduct.

On the morning of 29th April,  Pratham had come to my place and we went to HAL airport in my car. We had not had our breakfast. On reaching the HAL airport at 9 AM we asked the officials there about the availability of food. They said we have to go back to the main road and find a hotel. We came back to an hotel nearby and ordered food. Hotel owner recognised Pratham and was not willing to take money from us. But we forced him to accept it and came back to the airport. The film's heroine Sahar Afsha joined us there. I took the car from the security and drove near the helicopter. But I was told that there is no parking space near by. I had to drive back to the parking lot. There was another car that would take us near the chopper.

We boarded the helicopter and I started shooting from my mobile. I noticed that Pratham was not smiling. Out pilot name was Mr Prakash. Actress Sahar Afsha was in a thrilling mood when the helicopter took off since it was her first trip on a chopper. I was interested in checking what all was there inside the chopper. I noticed a Note pad with details showing the places where we were flying! Within minutes it was showing Ramanagara, Chennapatna…. When the chopper was passing through the clouds Pratham was shaken and shivering. 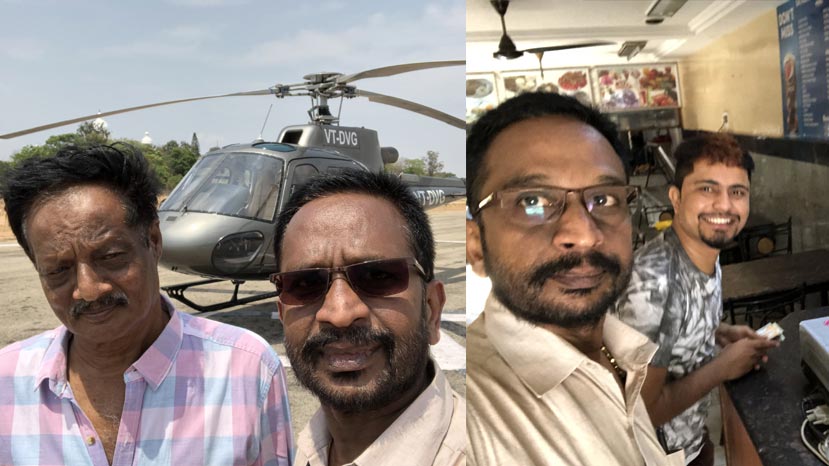 Meanwhile I was looking at my mobile for the available network. Jio mobile signal was available at some places and once I started the Facebook live from our Chitraloka page. But within few minutes I lost the signal. When we reached Mysore I got good Jio signal and immediately went LIVE in the air itself.  When we landed at Lalith Mahal Helipad I was still in live my Mysuru friend and also a senior journalist KJ Kumar was calling me on my other mobile which I could not attend. After the Live feed I called Kumar and he congratulated me saying that I was the first Kannada film journalist who has travelled in a chopper and doing a Live session  in Facebook. I asked him to come to the film shooting location and he came to the spot within one hour. I asked the pilot at what altitude we were travelling. He told we were 5,000 feet from the sea level and around 2,000 ft from ground level. It took us 35 minutes to fly to Mysuru from Bengaluru.

Shooting for the movie Nata Bhayankara started and I got busy shooting the videos and photos. Pratham had permission till 3 PM to shoot at the helipad. Time was nearing and Pratham was a little tense since he had lost something. Finally with a little delay the shooting finished and we boarded the chopper and were travelling back to Bengaluru and landed at HAL Airport. There was no time for us to have lunch and Pratham and all of us were hungry.

This was one of the memorable experiences for all of us. Thanks to Pratham for providing this opportunity to me.