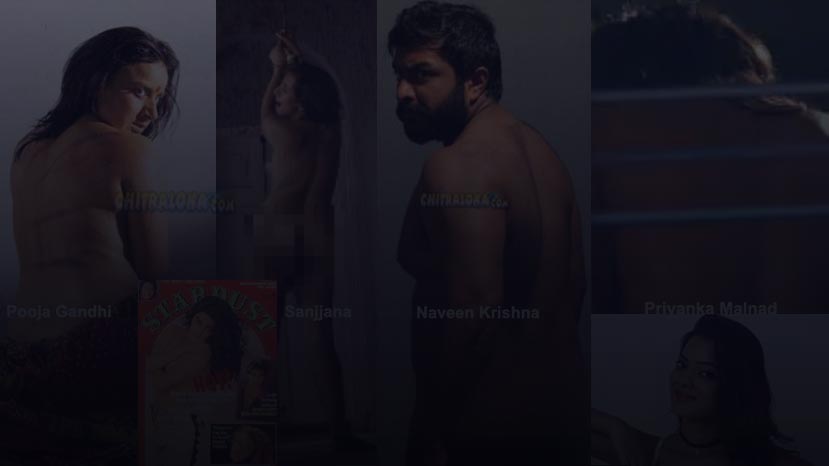 Actors having to do nude scenes when the story demands it is not new. Some actors agree to do it while some conservative actors may not agree. Those who agree have consistently pushed the boundaries of art. When Shivarajkumar posed only in a short being beaten up in a police station scene in AK47 it was a daring act.

When it comes to female actors it is a different story. They have to face many more problems. Female actors have acted in the nude when the script demanded it. Most times it is a cheating shot with a body double or masked body parts. Recently we saw such a scene in Jatta involving Sukratha Wagle. The story demanded it as the character is opposing the oppression of a male chauvinist who wants her to wear a particular kind of dress.

In India the most daring act was when Bollywood actress Mamta Kulkarni gave her bare back pose to Stardust Magzine in September month in 1993. It became a sensational. During those days there was no graphics! Even the actress accepted that she was complete bare for the shoot.

In last few years even in Kannada films this trend has started. In Dandupalya movie actress Pooja Gandhi had show her bare back. Her photos was published everywhere and it was in the movie also. For Haggada Kone movie, directed by Dayal Padmanabhan actor Naveen Krishna was complete nude in a scene. Recently, in Guruprasad directed EradaneSala Sangeetha Bhat showed her bare back in a scene. In Vaira movie directed and acted by Navarasan there is a scene of the heroine Priyanka Malnad showing her bare back. All these scenes have appeared in a few seconds on the screen.

Now the movie 2 starring Pooja Gandhi, Sanjjanaa and directed by Srinivasa Raju produced by Venkat released on 14th July. After three days of the release some clips started becoming viral which claimed that they were the censor deleted scenes of the movie.

This clip is about 1.45 minutes long which shows actress Sanjjana is tried up and cop Ravishankar makes her completely nude and with tortures her by hitting her through a catapult on her nude back. Sanjjana shouts. All these scenes last for nearly one minute. Sanjjana's body is shown in closeup and in some scene nude with blurring some of her body parts.

Chitraloka has published an article with some photos captured from the video clip. When we contacted Producer Venkat and explained the sequence he was shocked to hear that this clip has leaked.

When we contacted and told Sanjjana first she told it's a censor deleted scenes. The actress accepted that she has done this scene for the film but the censor board has deleted it. It is illegal to leak the scene now but she has no control over it. She was frank to admit that she did the role as it was required in the film to show police brutality on the gang members.

When contacted the director Srinivasraju "If it was in the movie I could comment. Now only Sanjjana has to answer."

This is the story of Sanjjanaa's nude body seen in the deleted scenes of the movie 2!