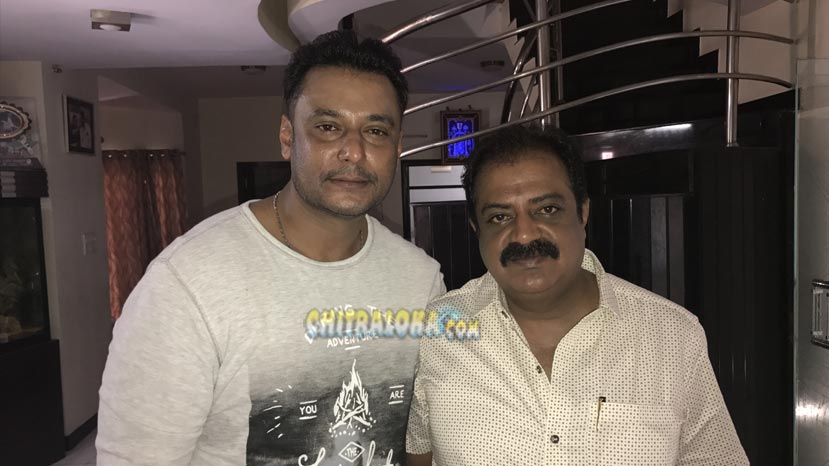 darshan's respect for his first producer

Darshan does not show his emotions in the open. I had a chance to witness first hand how he treats and respects people who have supported him.

Recently I had been to Challenging Star Darshan's office the "Thoogudeepa" distribution office in Gandhinagar with Majestic movie producer MG Ramamurthy and his friends. When we entered the chamber Darshan was sitting in his chair and Majestic movie director PN Sathya was also there. As soon as Darshan saw MG Ramamurthy he immediately stood up and greeted him and forced him to sit on his chair. Ramamurthy who is very soft spoken was shy and refused to sit on that chair. Darshan said "you are the person who gave me life from Majestic and because of that I'm here and you are my Annadata  and you have to sit on that chair otherwise I will stand and talk with you." There was no other choice for Ramamurthy and he sat in that chair and Darshan pulled a plastic chair and sat on that.

I have visited Thoogudeep office many times before. Whenever I have gone there the Boss' chair was mostly vacant. Apart from Darshan the only other person who uses it  sometimes is Dinakar Toogudeepa when he comes to the office. Darshan's associate Mallikarjun sits next to that chair and I had asked him many times when Darshan would come there to sit on that Boss chair. Mallikarjun used to smile and said even he doesn't know.

On that day when I went with Ramamurthy in a casual talk with Darshan I asked when asked how many times he has come to Gandhinagar office. He said it was only his second visit. "I first entered this office when we inaugurated the office during Bul Bul distribution." Dinakar has kept a film box and on that an idol of Saibaba. When asked him which movie box it is Dinakar said it was Bul Bul reel and that pooja is conducted for it and Saibaba everyday.