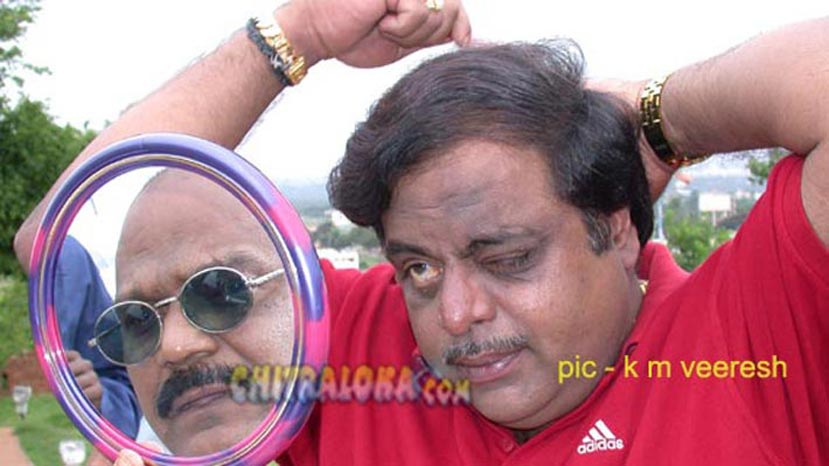 On the day of get together of ‘Karnana Sampathu’ a film on rebel star Ambarish and his fans the leading personality the Ajathashatru Ambarish narrated a tale of one of his fans from a distant Bidar district.

We bring you the clean and unselfish motive of the fans of Ambarish:

A sheep vendor from Bidar who is illiterate and not in a position to talk fluently arrived at a bet with his village chieftain in Bidar. He kept his 200 sheep in the betting when the chieftain said that it is possible for him to go to Bangalore and take snap with his screen God Ambarish. With a few hundred of rupees the sheep vendor came to Bangalore and approached four to five persons to meet Ambarish. Finally he landed at Kanteerava studio with the help of an auto driver. Outside the gate he met the still photographer Nagaraj. He narrated his betting tale to him. Next day at the ‘Chakravyuha’ shooting at High Land hotel the sheep vendor was called. Without any knowledge to him the photographs was taken with Ambarish and sheep vendor on the advice of Ambarish. Next day a huge photograph of sheep vendor and Ambarish was presented. He was surprised collected drops of water in his eyes and said he has won his sheep back. When Ambarish asked how you would go he said he will work as coolie for a few days get money and go to Bidar. Ambarish got angry and asked him to take Rs.200 from him. The sheep vendor very humble said it is not right on his part to take money from his God. That is not his intentions he said. Ambarish put a condition. If you want photograph you have to take this Rs.200. Sheep vendor agreed for it.

What is interesting here is the magnanimity of Ambarish and love and affection of an admirer – both are important part of this tale.

That’s why Ambarish is called as ‘Karna’ on and off the screen.