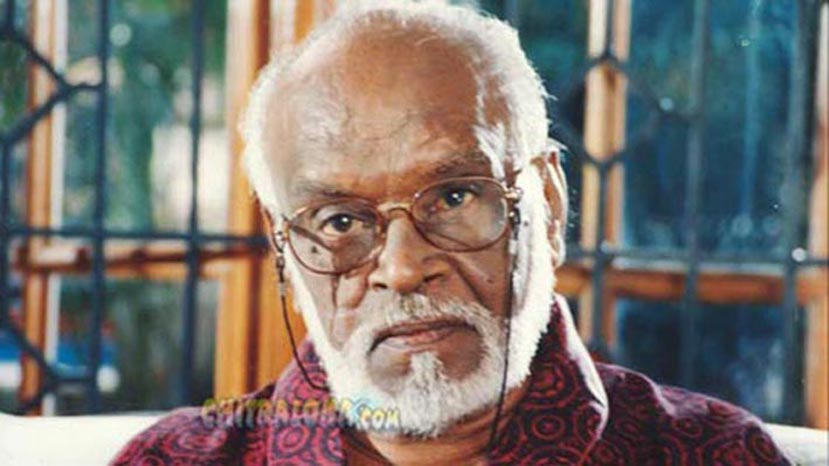 Veteram actor, playright, writer, journalist and Radio Anchor A.S.Murthy is dead.  He breathed his last on Tuesday morning at 8.30 A.M., family sources said. He leaves behind his son famous painter Prakash and two daughters Gowri Dathu and Usha and many talented grandchildren like singer Pallavi, Actress Shwetha and others.

A.S.Murthy was active till a few years ago when he perused film journalism and also building up talented artists for films and television.  He srarted an organisation called Abhinaya Tharanga which trained many artists.  Many of the artists trained in Abhinaya Tharanga have made it to films and television and have also earned good name through their work.  HE worked relentlessly to build a drama troupe and also  trained many people to work in backstage.  He is perhaps one person who involved himself in many segements of performing arts and also in the field of journalism.

The old age did not deter him from taking up initiatives to develop his organisation.  He was a very good actor and wrote many plays. Many of his dramas written by him is still staged all around the country even today.   He wrote comedy based plays and also serious plays.   His play "Huchcha' was perhaps one of the best written by him.

A.S. Murthy however became famous through his voice.  He worked for Akashavani (All India Radio) where he worked as an anchor.  He anchored the programme "Ondhu Maathu' which gave him overnight popularity.  And he represented Eranna, an agriculturist who wanted to know many things about the new trends in Agriculture.

There were many things which were likeable in him, but unfortunately Murthy had his own failings.   Any person associated with him always felt absence of maturity in the way he dealt with other. He was extremely self centred and would not easily accept the achievement of others.  And  he suspected others when his views did not coincide with other friends.  And many a times his sarcasm used to get jealous overtones.

But these were small failings compared to the voluminous achievements and milestones he has created in his life.  His smoking habit did not give him any trouble  till  he became an octogenarian. And no body dared t advise him over this chain smoking habit.  But he had to necessarily give up smoking and drinking to improve his health.  He did show some improvement in health, but I think lack of activity  in journalism and his other creative works did more harm to his health and peace of mind.

We have lost ASM.  I am sure we will not have another ASM for years to come. I have had some cherishing moments with him and was able to enjoy his sense of humour.  I was also able to penetrate into his small aberrations too.  I had many quarrels with him, but he always remained vicotrious.  I was always a happy loser.

May his sour rest in peace.