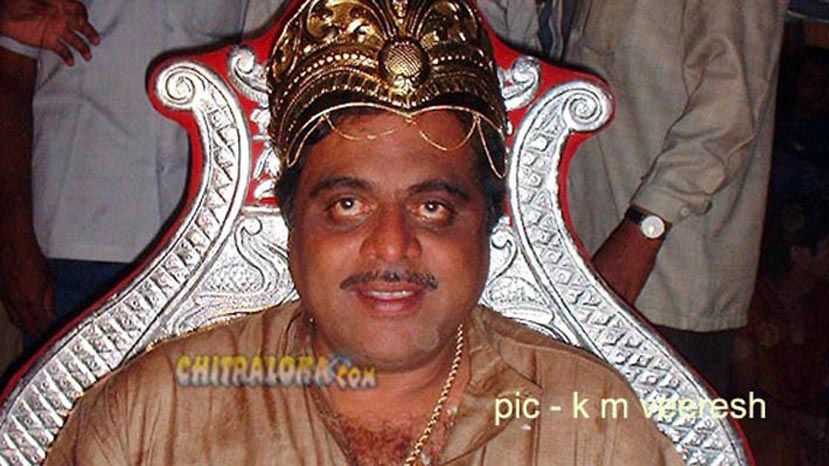 Do not criticize others - be a part of progress rather than parching on their life’ – the paradigm (ideal) of Kannada film industry considered as ‘Karna’ Ambarish holds this simple ‘mantra’ for cakewalk in his picture, political and public life.

A star turned member of Parliament from Mandya district of Karnataka Ambarish picks jovial mood and chats with his film media scribes. It is rather very difficult to make him to sit and talk. That’s because he has busy and hectic schedule.

In one such encounter the other day at Atria Hotel Ambi was in flamboyant mood. The chat the cine scribes had with him was memorable, filled with laughter and some frank admissions rolled in.

Here are the excerpts of  a chat:

HIS EARLIER DAYS
Ambi is frank and fearless from the beginning of his childhood. Naughty to the core the slim and trim Ambi the grandson of violin maestro T.Chowdaiah earned more friends and frightened many with his looks and pranks. He used to eat 13 Thatte Iddlis (equal to 50 idlis) with one and half ‘Seru’ Benne. He was one in eleven of all sports in Mysore. Be it Kabbaddi or Cricket Ambi is a hot favorite. His pranks used to make the girls come around the college and enter the classes. Ambi and his sister were studying in the same college. Boys and girls never used to talk in the college campus. But no one knew that his sister is also in the same college. One day it became inevitable for Ambi to talk to his sister in the camp. Back home it was a hullabaloo.

HIS 32 YEARS STINT IN FILMS
AmbarishIn 200 films he never worked with producers who are very strong. Exception to Vajreshwari Combines with whom I acted in ‘Odahuttidavaru’ with Dr.Rajkumar. In my career throughout I stayed in hotel room for 20 plus years and drove from Bangalore to Mysore. Always a heroine used to be with me while traveling to shooting spot either from Bangalore to Mysore or vice versa. The mantra he maintained is that never speak ill of others. Not coming in the way of anyone is also in his blood.

HIS KITHS AND KINS
Sumalatha Ambrish, Ambarish, AbhishekI am living with the family since 12 years. My day begins at 6.50 am every day. My lovely son get up to go to school. He is studying in 6th standard at BGS near Kumbalgod. In his earlier days he never used to come to parties with me because he was not able to understand English. Now the English he speaks is superb and I cannot understand it. He plays some musical instruments. He is good at games and studies too. I leave the option for him to carve his life as he grows. My brother a civil engineer is blessed with a few children is a happy man. He always used to say that he does not want to work under anyone and made it big in his profession.

HIS CRAZE FOR DOING GOOD TO PEOPLE
I don’t get down till 10 in the morning and before this I will be speaking to bureaucrats to solve the people’s problems. Before this I had to take medicine for my sugar complaint and eat my breakfast quickly. Recently I solved a long pending case and provided jobs for 31 people. I have to meet the concerned people before 10 am because they would proceed to their job and in offices it is difficult to get them as they keep busy in their work. I don’t says that I can do all the work of all the people. Around 100 people who come I could work for only 10 people woes. In a month I would be meeting around 300 people. What is astonishing is that people not connected to my Parliamentary constituency come for help. I have traveled nearly 1600 places in my constituency but I was surprised when I received a person from Ilkal at my residence. He asked for recommendation of his name to Rajyotsava award. I said it is not possible. I brought to his notice how this works out. Then he saluted me and went back to his place.

HIS CONCERN FOR KANNADA NADU AND DASARA FESTIVITIES
I am proud to be a son of Karnataka. God has given me good position in films and then in politics I always tried to maintain good image by working to the people. But some detractors told that ‘Dasara’ should not be celebrated because of drought prevailing in the State. I shot back by saying that it has to performed to appease the Gods. You look at the weather condition there has been good rain after Dasara festival. Not because I am a Mysorean and it has to be done. I am doing the famous Banni Pooje with my friend Adikeshavalu every year. We do all these for the good of the State. I have seen this rich culture heritage from my childhood. When the Maharaja of Mysore Jayachamarajendra Wodeyar used to look at people when he was in the Golden Howdah we all used to get so happy during the Dasara procession. I had a dream to fulfill. That is to take photographs of my mine with the present scion Srikantadatta Narasimharaja Wodeyar when he is in full dress of a King. I expressed my intention to him. It is a private place. Wodeyar asked me to come at 10 am on the day he wore the traditional dresses. Even for Vajpayeeji calling I never used to go at the dot of time. I went to Mysore this time and took photograph with Wodeyar in his full costume of a King. I felt like bowing to him to get the blessings which I did respecting the Mysore Maharaja.

The Mysore Maharaja empire is the one which has five palaces – Mysore Palace, Bangalore Palace, Jaganmohan Palace, Lalithamba and Lalith Mahal Palace. They have done so much to the old Mysore state. The entire Sadashivanagar in Bangalore belongs to them. Long back ago I was offered 80x120 site at Sadashivnagar by one of the closets of the King. He asked me to pay Rs.8 lakhs in installments. I did not made up my mind to take such an offer.

HIS CRAZE FOR CARS
AmbarishAs we all know Ambi is a very good horse rider and he is fond of excellent cars. His fond car is Rolls Royce. It is worth nearly 4 to 5 crores and a person like Vijaya Mallaya could afford to buy it. I was given a Rolls Royce car to travel by B.R.Shetty in Dubai when I went recently. It is a dream come true to travel in that car. Shettyji from Karnataka has made a whopping business there. He has invited me recently. He went with seven dollars to Dubai and he has grown up to the height of a billionaire today. Shettyji offered me a watch studded with diamonds. I refused to take it. He told me that in case he does not accept it he would put it to dust bin. I took it and came to Bangalore. I was told that the value of that watch is Rs.32 lakhs. I was stunned for a few minutes. How such offerings come Oh God whether I really deserve it? I questioned to myself.

HIS CHERISHED ARTISTES ASSOCIATION
I want something wonderful to happen to Artistes Association. I got it sanctioned when I underwent an operation. I was getting food through food pipe. At that situation I went straight to Vidhana Soudha to meet the then chief minister J.H.Patel. Everyone was shocked after seeing me in such a condition in Vidhana Soudha. I have got it undergoing great difficulty. Now the path is clear. Rs.10 lakh has been sanctioned by Union Minister Ananthnakumar for the building. We have not done an function since four years of the Artistes Association. The last one was held at Chowdaih Memorial Hall. My busy schedule keep me occupied throughout the day. I have told that I want to give up President’s post so that others who are free can work. But other artistes want me in the chair.

ON HIS HABITS
AmbarishAmbi is frank in admitting about the drinks he takes. I drink only after I retire from the work every day. Not even a single day I drink and work. Whether it is shooting spot or my political career. For 25 years of busy acting schedule I used to retire at 9 pm and after bath I used to start my drink. I never drank in the day time. The only occasion I had one peg of Whisky is when I had to fight with a tiger. That’s all. No one should drink in the day time. I have an example for such day time drinking. My good friend Srikanth Nahatha had a lever transplant recently and it because of boozing throughout the day. Ambi admits that his capacity is a full bottle of whisky.

ON HIS RECENT FILM ‘ANNAVRU’
He had doubts whether it would be complete or not. I had a good experience when I went to Hubli to shoot a song Kannadakkagi Janana……, the woman Corporators were in the front row. When the camera was pressed in to action. There was some disturbance. The film unit people used to scold the women in the front. I immediately alerted that person that they are all Corporators of Hubli and who knows they may become Mayor of Hubli one day.

I did not approve the title ‘Annavru’. Because there is only one Annavru in Karnataka that is Dr.Rajkumar. I asked the producer to keep the original name of Tamil film ‘Dhalapathi’ because a similar word is found in Kannada dictionary also. They pressed me to accept this title. The film is made beautifully and I bank lot of hopes on this film.