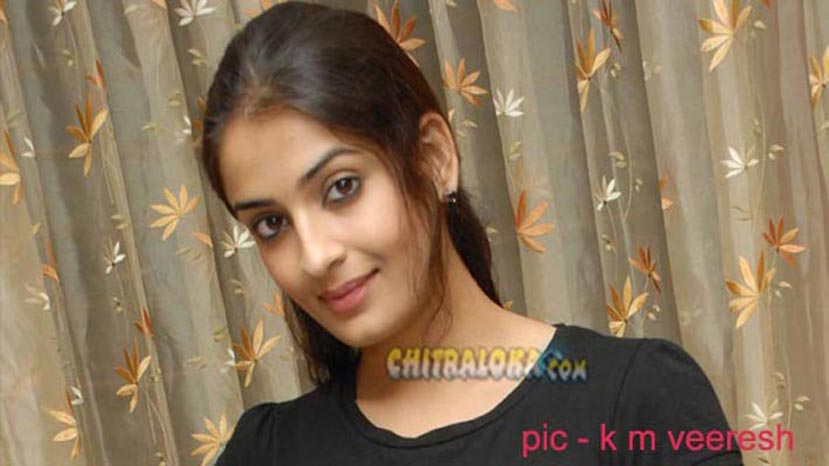 Akankhs Mansukhani is the latest model and a fashion designer from Mumbai who is making big waves in Sandalwood now. Much appreciated Kannada film "Olave Mandara' has shown her immense talent coupled with beauty. The lady with brown eyes and attractive hairdo has made such a big impact in Sandalwood that she was booked for a Kannada film immediately after the release of her debut film Olave Mandara.

Incidentally the Telugu version of Olave Mandara is also getting released shortly. Akanksha's second Kannada film Devi has Madhu Bangarappa as a hero. Sneha Ullal plays the main lead in this film in which Akanksha plays a bubbly girl's role. Akanksha was born and brought up in Dubai and has now shifted her base to Mumbai. She has already acted in a 300 episode tele serial Kajal telecasted in Pakisthan. The entire serial was shot in Dubai. Akanksha has already participated in many beauty pageants like Pantene Zee India teen queen middle east 2002 which she eventually won says that she is ready for glamour oriented roles also. She is also the winner of miss beautiful eyes in miss india international 2005 besides being the finalist and winner of miss Beautiful Eyes and Viewers Choice Sony My Miss India in Femina Miss India 2008.

"I know it would be not be difficult to act in variety of roles in the film industry if you are talented. I was selected for a deglmourised role and a simple village belle who is also a good dancer. But I need to show my talents in performing in glamour oriented roles also' says Akanksha who has modelled for many commercials for Jewellery and Saree Ads. She has been part of many mobilink and Print ads for sarees, jewlelery and even an advertisement for Bank of Baroda.

Akanksha has been part of a music video J tumko humse pyaar nahi which was made by T Series.