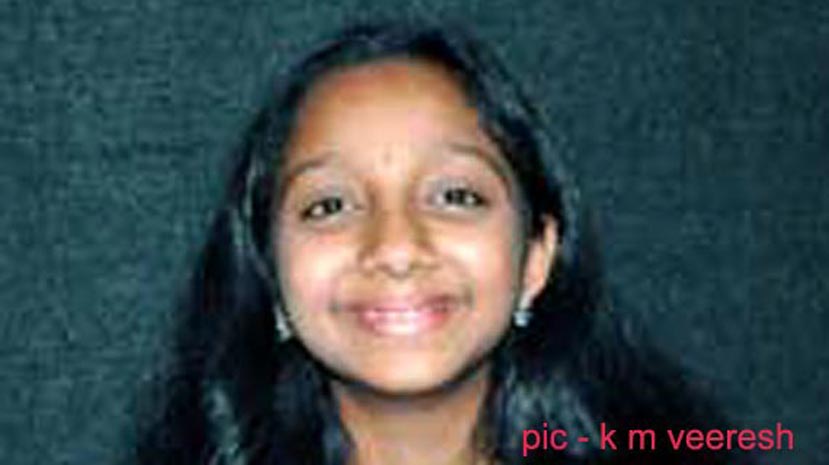 Studying in 8th standard at Sudarshana Vidyamandir in Jayanagar Adithi the budding child actress has shown promises in various fields. Born to Ravi an engineer and professor mother Arundhati - Adithi evinced interested in acting four years ago. She joined the theatre troupe of veteran B.Jayasri to learn 'Ranga Geethe'. Slowly she picked up interest in stage plays. She has acted in 'Jokumaraswamy', Bashalankara and Kashiram Kothwal. She has participated in 12 documentaries and in Edu-Sat an ISRO program she made brilliant appearance. In Bournvita Quiz she was the confidence kid. In the holidays she is in to adventure sports like Water biking in the sea and para sailing. She learnt Bharatanatyam from Sridhar/Anuradha and Revathi Narasimhan for some time.

Such a daring and intelligent Adithi has appeared in the main role 'Ganga' of 'Mitayi Mane' directed by veteran actress Arathi. She took part in the 25 days shooting during October Holidays and bunked the classes for just 15 days. She can afford to bunk classes because she is good in studies too.

She comes from village to city in the film 'Mitayi Mane'. She has given perfect expressions when she is forced to mix with modernity. The cutting of lengthy pony tail is what irked Adithi during the shooting. Otherwise the shooting has been very cool and Arathi madam has been very courteous she remembers. She wants to become an architect as she grows up like her father.