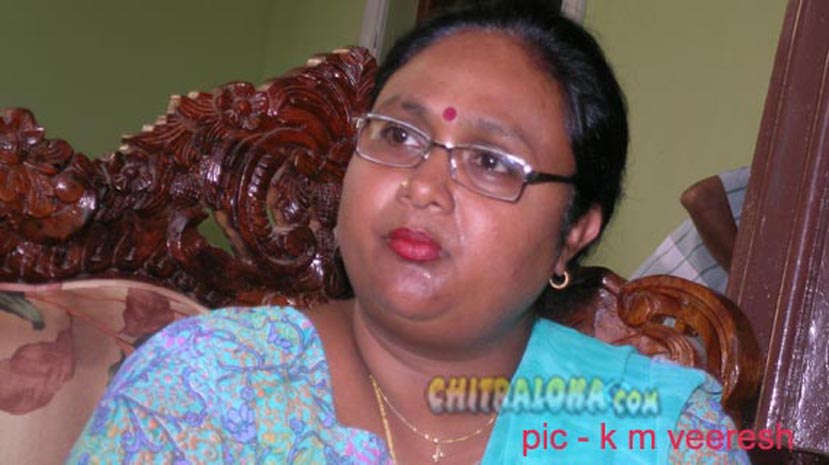 In the days of not following the ancestor food steps becoming rare here is an example of daughter following the footsteps of mother that too from the beginning of 13 years of age. That is the age mother also started her career as cabaret dancer in South Indian films.

We are talking about the cabaret dancer mother ANURADHA who has acted in over 160 films and daughter ABHINAYASRI who is 55 films young in three years of career. Both surfaced for an item song at Rockline studio on Saturday for the film ‘Ambi’ the 25th venture of top producer K.C.N.Kumar.

Abinayasri‘What’s wrong in wearing tight and too small dresses shot back Anuradha with her daughter Abhinayasri sitting next to her when the media met her. In our days we used to very small dresses and today as small as the dresses gives you more money she says without any small repentance. There is nothing wrong in my daughter doing cabaret dance or item songs. In fact she has the big future when compared to the heroines. But off late she is also playing good roles. The one she has done in ‘Kariya’ Kannada film is an example she says with huge smile on her face. The point what I want to make is very practical. When we don’t do others will catch it up. In my days when Ambika, Geetha and Madhavi were heroines the cabaret dancers – Jayamalini, Silk Smitha and Jyothilakshmi were doing splendid job. When the heroine was wearing full churidhar costume I was coming with very small nikkar and transparent upper clothes. But look at today the heroines are ready to wear any kind of costumes.

How is your life after a long innings as a cabaret dancer? I am content. My husband Satish is not keeping well. He is like my third child now. He met with an accident a few days later Silk Smitha died.

Are you happy with your daughter Abhinayasri performance? This is the profession she picked at the age of 13. She is doing very well in shaking legs, wearing skimpy costumes and doing all the tickling masalas for the silver screen. I wanted her to study but after 10th standard she could not make it. She has acted in 55 films.