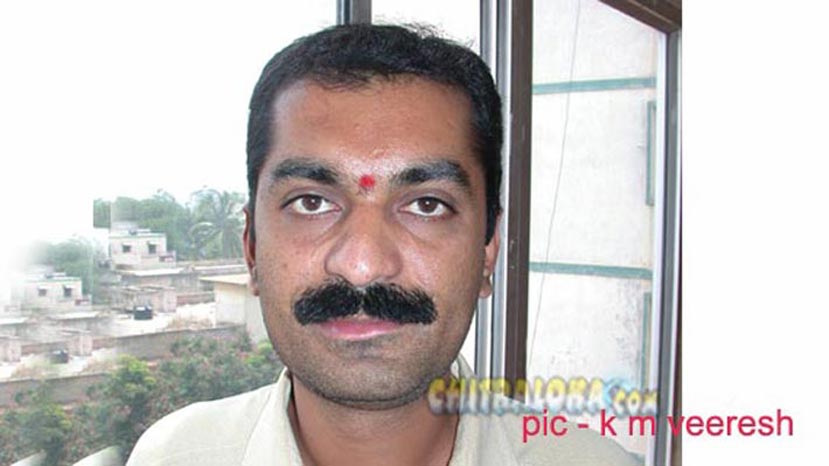 Ramesh Yadav entered the film industry at a younger age of twenty years to become a film distributor. Born in a middle class family, Ramesh was a film bug from his younger age. As a distributor he had released many Tamil and Kannada films in the first few years of his film career. In the year 1996, Ramesh Yadav became a Kannada film producer.

He joined with director Shivamani to produce three films Minugu Taare, Agni Sakshi and Kubera. Later he made films in partnership with others including actor Jaggesh. He made films like Drona, Aha Nan Madveyanthe and Gatti Mela. Actress Shruthi became a partner of his production house during the making of Gatti Mela. Though many of these films were successful, Ramesh Yadav was not able to make films on his own terms and select stories that struck a chord in him.

Later Ramesh Yadav decided to make films on his own and then signed the then upcoming actor Sudeep to play the lead in the film Vaali. He had developed a good working relationship with director S.Mahendar and chose him to direct the film. It was a remake of Tamil hit Vaali directed by S.J.Suryah. Though the film did not have a long run, Ramesh Yadav was able to make some profits out of the film. Then he produced films like Balarama, Don,, Thaayi Illada Thabbali, Daasa, Kshaama, Shanthi, Ashoka, Krishna which have been released so far.

And now he is ready with his next film Akka Thangi which has already created waves in the Kannada film industry.

Darshan is playing a double role in this film with Navya Nair and Rekha as the two heroines. Ramesh Yadav believes in hard work and honesty in the profession that he has chosen as a great passion. He puts in his hundred percent efforts as a producer. He accommodates the opinions of all his unit members and believes that the film is a product of an efficient team work. He does not take things easy while making films and never compromises on the quality of films. “If a story needs a particular pattern of narration and needs to be made in a larger span I would not mind spending whatever is required for the film without going into the business aspect of the film’ says Ramesh Yadav.

And Ramesh likes to make different type of films. He was also made films that have won national and international recognition and appreciation. His film Kshama directed by Baragooru Ramachandrappa won the prestigious state award besides winning three other category awards from state government. Actress Radhika who had acted in Thaayi Illada Thabbali won the Best actress award from the state government. And Shaanthi made by him and directed by Baragooru Ramachandrappa entered the Guinness book of world records in the year 2004 as the only film to have been made with a single woman artist. This was the first Indian language film other than Hindi film Yaadein( produced in the year 1964.) to be included in the Guinness Book of Records. The film also had a story which spread the message of peace to the entire world.

Ramesh Yadav is also an established story writer who wrote stories for his films Thaayi Illada Thabbali and Ashoka. He has written a new story titled as Cinema which has already been registered in the Karnataka Film Chamber of Commerce. This is a film based story.

Ramesh Yadav has now started his new banner under the name of Ramesh Yadav Movies which will take care of production and distribution of films. He is a successful film distributor for films like Gaja, Indra, Varanam Aayiram (Tamil). He is the whole and soul distributor for Akka Thangi in entire Karnataka and outside. He has also started a television production unit called Ramesh Yadav Telefilms which will take care of making television serials. And he has started R Music which will market the audio of films. R Music has already marketed the audio of films like Krishna and Akka Thangi made by him.

He is also into production of a Tulu film titled as Dever to be directed by Sudhakara Bannanje. He has already published a Tulu Novel with the same title under his own publishing house named as Ramesh Yadav Publishing Company.