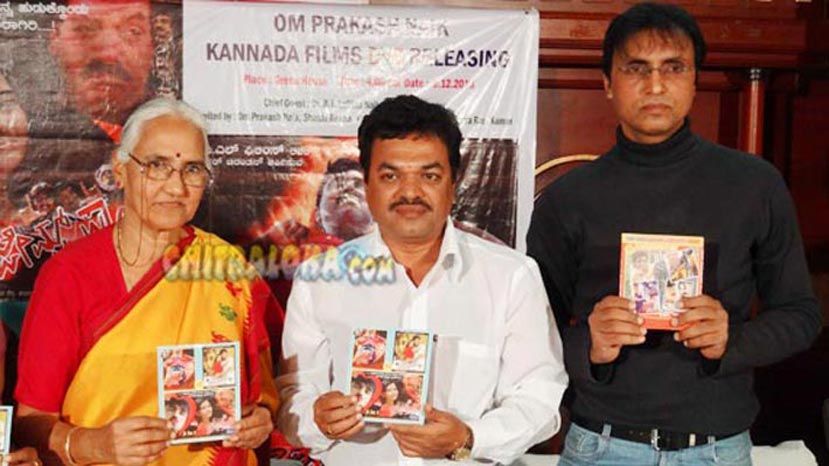 Former Minister B T Lalitha Naik and her son actor-director Omprakash Naik lashed out at the Karnataka Film Chamber of Commerce for not helping small producers and their films.

B T Lalith Naik and Omprakash Naik were talking at the DVD release of Omprakash Naik’s three films including ‘James Pandu Comedy Express’, ‘Ashanthi’ and ‘Kanasondu Shuruvaithu’ at the Green House in Bangalore.

‘Today we are releasing the DVDs of earlier films. This is not a happy moment but a saddest moment for me, because I am not able to release the films in the theatres. We are small time producers and we have already spent the amount on the films and are not able to spend further on the release of the films. Ours is not remake films nor do the films have any violence or sex. But still we did not get any subsidy. There is no one to help us. The Karnataka Film Chamber of Commerce remembers us only during the time of elections and forgets us once the elections are over. The KFCC demands Rs One lakh from new members but does not care about our films nor asks whether we have released the films or no’ said Omprakash Naik.

Continuing further, ‘there is a lot of corruption in the subsidy committee. The committee does not consider our films. Ours is neither a remake nor adult related films. But still none of my films has got subsidy. I have never asked my mother to recommend my films for subsidy. I don’t mind if my films get subsidy or not? But I will never indulge in corruption’ said Omprakash Naik.

B T Lalitha Naik said, ‘the KFCC must help small producers like Omprakash Naik. But the KFCC is not at all interested in helping its members. If this is the case, then there is no way for us than protesting against the KFCC. If I get a chance to be the president of the KFCC, then I will help all producers because it is not my money and the money the KFCC gets is from the members. I will see to it that everybody gets justice’ said Lalitha Naik.