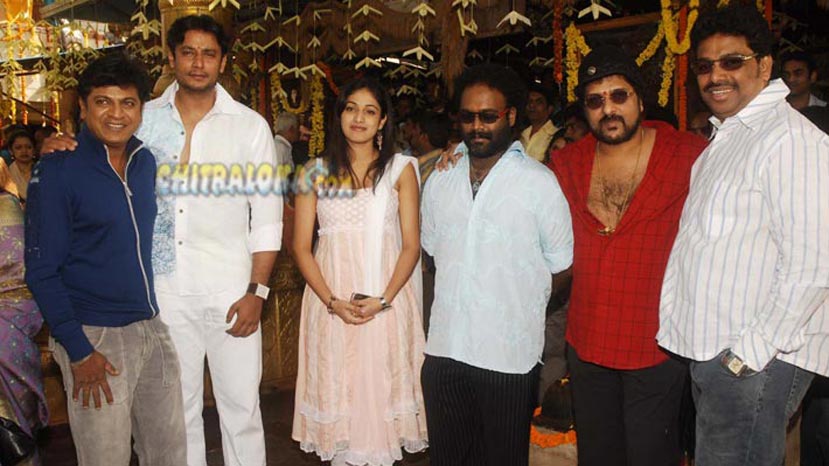 Shivaraj Kumar and Sonal Chauhan starrer Cheluveye Ninna Nodalu  was launched on December 8 at Durga Parameshwari Temple at Vidyaranyapura. Excuse Me M.N.Suresh is the producer of this film  for which the shooting will take place in the new seven wonders of the world.

Many film personalities attended the Muhurath with Crazy Star Ravichandran  and Challenging  star Darshan coming quite early to  greet their young friend  Raghu Ram  who is making his debut as a director through this film.  The artists and technicians of the film were also present.

The media was invited to the Muhurath only in the afternoon after some shots of the film were taken inside the Temple. Hatrick Hero Shivaraj Kumar,  Sonal Chouhan, Hari Priya, Kavya,  Producer Suresh,  Raghu Ram, Cameraman Kabir Lal  were present at the press conference.

Shivaraj Kumar said that he is playing a tourist guide's role in the film.  "It is a soft love story  and  the locations  and  sequences of the film will be the major highlights.  I have seen Raghu as a journalist earlier and he had also worked with me in many films.  He has worked out a good script in this film.  Since this film needed a heroine of innocent face, I suggested Sonal Chauhan who had already worked in Hindi film Jannat.  Producer Suresh has told me that he will not spare any efforts to make this film the most exciting product of  2009' says Shivaraj Kumar.

Sonal Chauhan said that she will be happy to work in her first Kannada film which can boast of some big names like Shivaraj Kumar and  M.N. Suresh.

Raghu Raj said that he had believed in the team work  and he has been assisted by many people while writing the script.  Many of his friends like Tarun Sridhar had helped him giving some suggestions.  Chinthan had written the dialogues of the film and  Music director Harikrishna had offered him some suggestions.

Hari Priya who is working as another heroine of this film said that she was pleased to work with some big names.  And about Cameraman Kabir Lal she said that she had just seen the film Yuvaraj to find out how he had photographed  the heroine Katrina Kaif very well.  "I  am little selfish. I want him to photograph me as well' said Hari Priya.