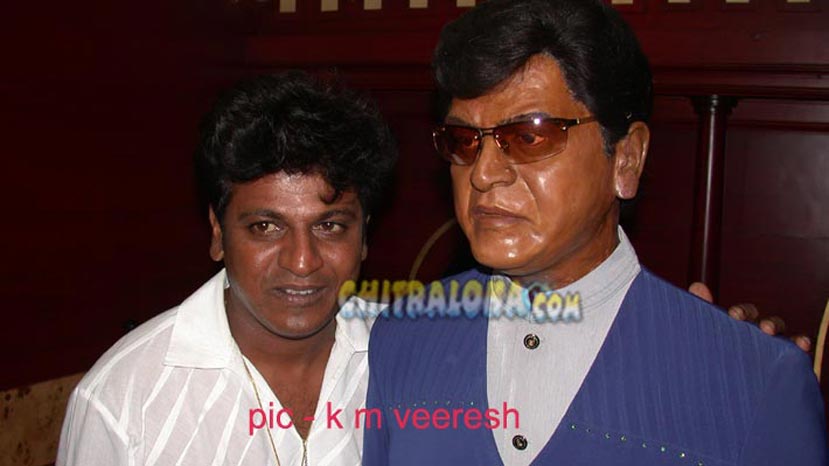 For the first time in Kannada cinema a wax idol of an actor was inaugurated. Matinee idol Shivrajkumar gets the credit and his life size wax statue is the dexterous work of Candle Craft World situated in Basaveshwaranagar, Bangalore. The same company had made the wax model of President of India A.P.J.Abdul Kalam sometime ago carved superstar Shivrajkumar statue in 21 days time with the help of five artistes at work.

The first ever such statute was formally inaugurated at Green House restaurant by renowned director Om Saiprakash. Mohan and Shyam of Anand Audio who have been responsible for such a remarkable idea are taking this wax model to all the theatres where Kannada film ‘Rowdy Aliya’ is screening.

Speaking on this occasion actor Shivrajkumar disclosed that he is totally moved by the gesture shown by producer Mohan of Anand Audio. I am extremely happy and credit for this goes to Anand audio. After I saw this I was amazed. I had seen such statues at Madam Tussads in London. Next to Amitabh Bachchan and James Bond wax statutes I stood and taken photographs. Now such a statute is made for me. I have to thank Anand Audio more and more for this credit giving to me added Shivrajkumar. 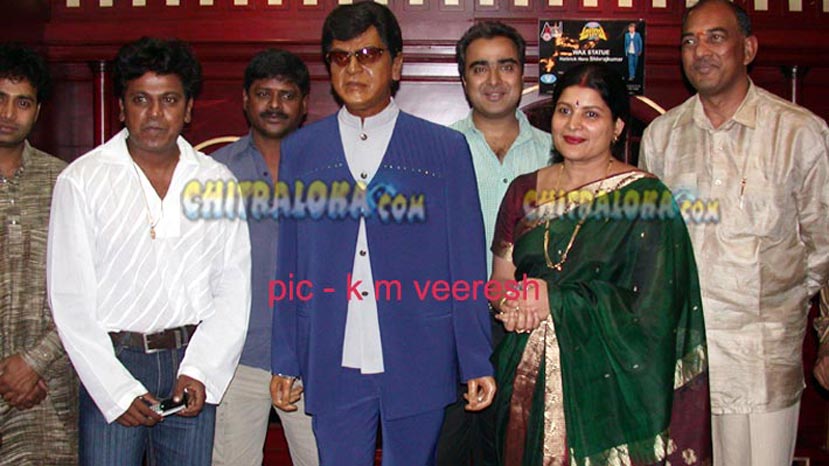 This wax model is prepared by Darwin and Shreeji Bhaskaran. Darwin is graduated in arts from Chitrakala Parishat in Bangalore and he has been in this field since eight years. This one is specially made to order for Anand Audio and its cost is less when compared to President’s wax model. This has to be kept away from sunlight and fire. For a statue like the President of India’s it cost Rs.75000. The cost of Shivrajkumar wax statue is little less in cost. Darwin says that he is 75 percent happy in the final shape of Shivrajkumar wax model. Shortage of time is the main reason. Otherwise we could have created a wonderful one he admits. It is better kept in frames he says. Shreeji Bhaskaran has moved from Australia to float Candle Craft World in Bangalore a year ago has been able to do a special photo session of Shivrajkumar before start on the work. Nearly 300 pictures were taken from all angles to make this standing Shivrajkumar of his height in wax material he says with a glee on his face.