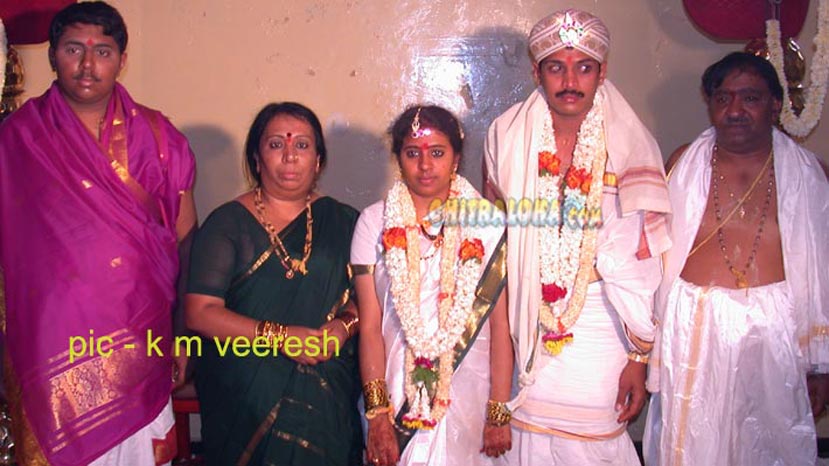 Where was the entire Kannada film industry on 8th September 2003? For this question the answer is very simple. They all assembled at senior Film Publicity Officer D.V.Sudheendra daughter wedding at Satyapramoda Kalyana Mantap opposite National College grounds, Basavanagudi. Chandrika (Ashwini) daughter of D.V.Sudheendra and Padma married Sridhar Jamadhagni son of Ramachandra and Padma. Sridhar Jamadagni is a proprietor of an air conditioner contractor.

Actor Rajeev, noted lyricists R.N.Jayagopal and R.N.K.Prasad came from Chennai to attend this wedding. Producer Ramoji Rao, Master Hirannaiah sent his best wishes for the newly married couple. There were nearly 100 greetings from Madras, Hyderabad and other places in Karnataka.

The Kannada and culture minister Rani Satish was impressed with the lovely food items served by D.V.Sudheendra on this occasion. The mouth watering buffet in the reception was very deliciously prepared by Sudheendrachar of the famous Achar Bajji shop in Basavanagudi. 40 members troupe of cooks increased to 60 at the reception. In a traditional style famous priest Ananda Theertha headed the team of priests to conduct the marriage.