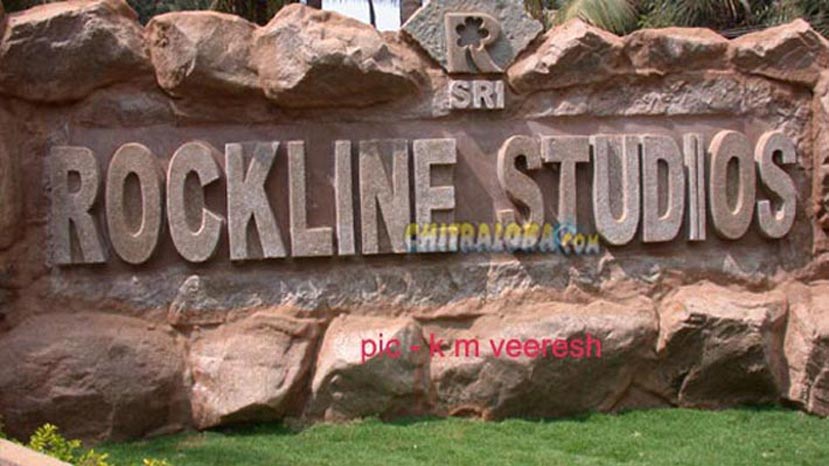 In the history of Kannada film industry no one has built a spectacular studio like how producer Rockline Venkatesh has built in his six acres of land at Nagasandra which is just 12 kilometers away from Bangalore City.

Popularly known as ‘Rock of Gibraltar’ of Kannada cinema Rockline Venkatesh grit, determination and application of mind is surely a model for everyone. What the others do in hundreds of acres and hundreds of crores Rockline Venkatesh has just made in a compact and complete style giving room for improvisation of his Rockline Studios frequently.

The six acres studio of Rockline Venkatesh is pretty good for the eyes as the lush greenery is maintained. The 300 coconut plants greet you with cool breeze. The greenery on the vacant floors makes it a place to visit again.

As we enter the Rockline Studios and walk a furlong you find the Ganesha Temple that is a typical one you find in the temple cities. This is the beginning place for any producer as the Pooja takes place here. As you raise your head you find the majestic two buildings.

ON THE LINES OF LEELA PALACE 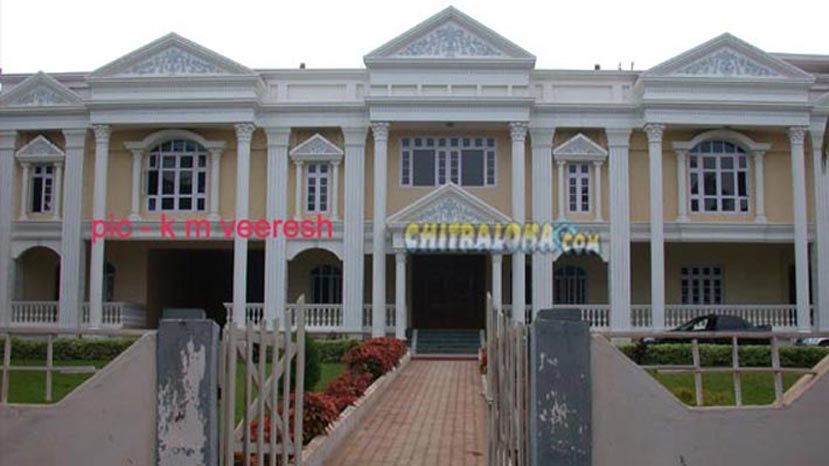 The studio floors are on the standards of seven star building on Airport ‘Leela Palace’. The magnificent two buildings ‘NARASIMHA’ and ‘LAKSHMI’ floors satisfy the needs of all types of film makers from modern to village based subjects. The constituent of ‘Narasimha’ block has a huge 120x80 open floor on the backside with two floors. In the front elevation you have all the requirements for an up to date modern film making. Three make up rooms in each floor in the international standard one AC bedroom on each floor in the European style is the cynosure for stars. On the left side are the three floors ‘Lakshmi’ block with three floors. Two make up rooms on each floor with a huge kitchen, ‘Thotti Mane’ on the ground floor suits the village based films. In the backdrop of this Lakshmi block is the plantain trees and a well and corridors made to the perfect taste. On the backside of this is what we have the environment suited for Malnad areas.

The total built in area occupies two acres of land and 500 yards away from this studio is a huge Nagasandra lake that is once is best suited for film makers. In addition to it there are three big rooms consisting of properties used for the films. Even such properties are available in this studio.

Like how the permanent thing in life is ‘Change’ Rockline Venkatesh has some areas for extra artistes to stay, a huge dining hall is under construction. A 30 KV power has been approved recently for providing uninterrupted electricity. There is non stop water supply.

Rockline Venkatesh office is another place that is behind the ‘Lakshmi’ block in the studio. There are two floors in the office building.

Rockline Venkatesh the producer of over dozen films is also a hero from ‘Dakota Express’ the run away hit film. He later acted in films like ‘Dheera’ and ‘Balarama’. All of them have given him additional mileage and he proved his mettle on the screen.

The cynosure of Kannada film industry ‘Rockline Studios’ would surely be an unforgettable experience for film maker.

You bring the raw stock, artistes and technicians. You can surely go away with completion of a film.