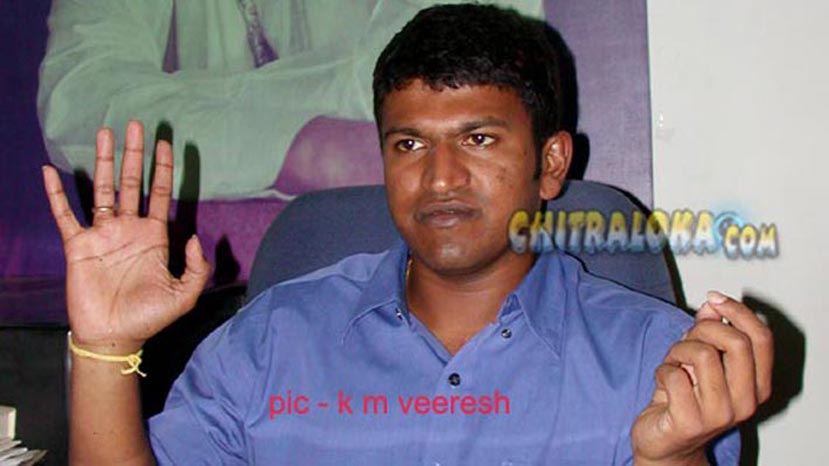 The power star of Kannada cinema ‘Raj’ Kumara – Puneeth Rajkumar who is on the way to hit hat trick has celebrated his 29th birthday with pomp and gaiety in Bangalore. On March 17th Puneeth started receiving calls on his mobile early in the morning. He had no time to take his breakfast. So much was the rain of greetings and wishes. His fans came from all the quarters and made a humble request to cut the cake. A fans association formed ‘RASIRAPU’ (Rajkumar, Shivrajkumar, Ragavendrarajkumar, Puneeth Rajkumar) conducted poojas at the famous temple of Male Mahedeshwara Hills.

With two top hits ‘Appu’ and ‘Abhi’, the third one of Puneeth ‘Veera Kannadiga’ has reached the 80th day of screening in Bangalore and other parts of Karnataka. It is almost certain that he would also conquer the hat trick tag like his elder brother Shivrajkumar has got long back.

In advance Chitraloka mega portal would like to call Puneet Rajkumar as hat trick hero. Speaking over telephone Puneeth disclosed that he would like to do more social work for self satisfaction from this year.

Remembering the gift he had got from his mother – a Maruthi 800 car well modified, when he turned 17 Puneeth considers this as the unforgettable one in his lifetime. His wife Ashwini is planning to take hubby to abroad and present a gift there.

Now coming to his career in good progress Puneeth says he as agreed for a story for family banner that would mount in May. Two more for outside banners are on the cards after home banner production says Puneeth. The technical advancement of films is always fresh in the mind of Puneeth.