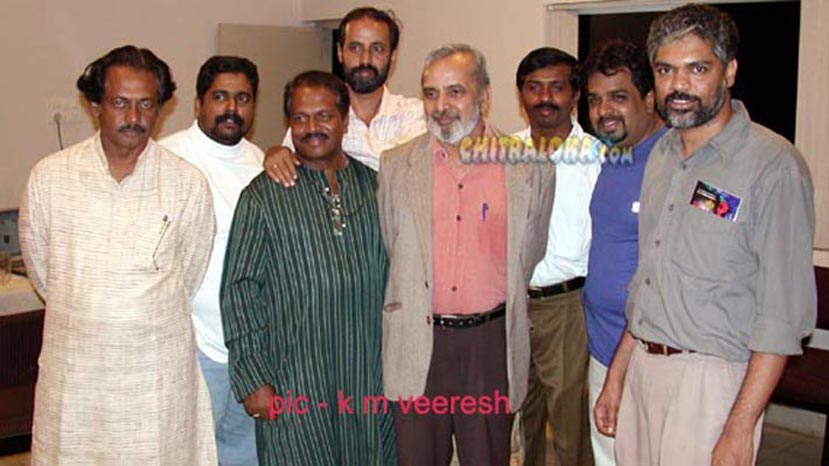 ‘Great people assemble at great occasions. One such memorable evening was at Bangalore City Institute on Wednesday. The honor bestowed on ‘Mouni’, ‘Singaravva’ and English film ‘Stumble’ at the national level made the producer and director of ‘Mouni’ N.Sivanandam and B.S.Lingadevaru respectively to organize a ‘Yochane and Yojane’ evening. It really turned out be an evening of mixed opinion on the topic floated. The giants like Dr.U.R.Ananthamurthy, Girish Kasaravalli, Nagathihalli Chandrsekhar, T.S.Nagabharana, G.S.Sadashiva, H.G.Dattatreya and the youths with proud work like Prakash Belawadi, H.M.Ramachandra, Girish Rao, Udaya Marakini, B.Suresh gathered in the midst of all leading newspaper journalists.

On this occasion the web page of ‘Mouni’ designed by Chitraloka was inaugurated by noted director - golden boy of Karnataka Girish Kasaravalli.

On the new idea floated – A club of like minded film makers different opinions were expressed.

Indrajit – I agree with suggestion of Club. Many useful tips for youngsters is possible from this idea.

Prakash Belawadi – There is no platform to express about ourselves. In the earlier days it was different scene. The brain drain was economically significant. It was a dash to our self respect. I hear about a colony of Japanese in India. This is called the ‘Get Town’. That means to say for the rest of the society they do not care. Why can’t we have a platform to assess valuable data. I don’t mind in giving support of my friends too. We get so many advantages from the government and industry. Let this ‘Koota’ give up other issues and mainly think on delectable points. We have a person like Girish Kasaravalli who is having his own theory and mindset on films. We have to get support from such persons. Let us not appreciate ourselves. Assemble for good work.

Nagathihalli Chandrasekhar – At the script reading level and concept level this would give wonderful result. In Kerala this type of movement is found. We have to face many battles today for making a film of values. We have to set aside the egos and the cultural vacuum is possible to dissolve through such conglomeration of intelligent people.

G.S.Sadashiva – The idea of ‘Koota’ is good but how it works out is difficult to say. Practically the discussion of scripts of one with others may not be that easily acceptable. The urge to make good film is laudable.

B.S.Lingadevaru – When we made this film we were blind on how to go about marketing and promoting this film. It’s because my friend KM.Veeresh I was able to apply for Panorama at the last moment. We youngsters look forward for so many relevant and information at this juncture. In this information age we are not getting information. The main purpose of this ‘Yochane and Yojane’ is help the newcomers with able guidance from elders.

H.G.Dattatreya – With no problems ‘Mouni’ was made. The locations were well thought of and arrangements were also good. This ‘Koota’ thought now is a good proposal. Getting suggestions from elders was done earlier also. Seshadri got help from elders for his ‘Munnudi’. I agree with Lingadevaru as for as the information required to compete in various festivals. Thanks to internet that gives some worthwhile details. There are about 350 places in the world where so and so film could compete. But all this information should be provided to newcomers. Let ‘Mouni’ film release in this rainy season.