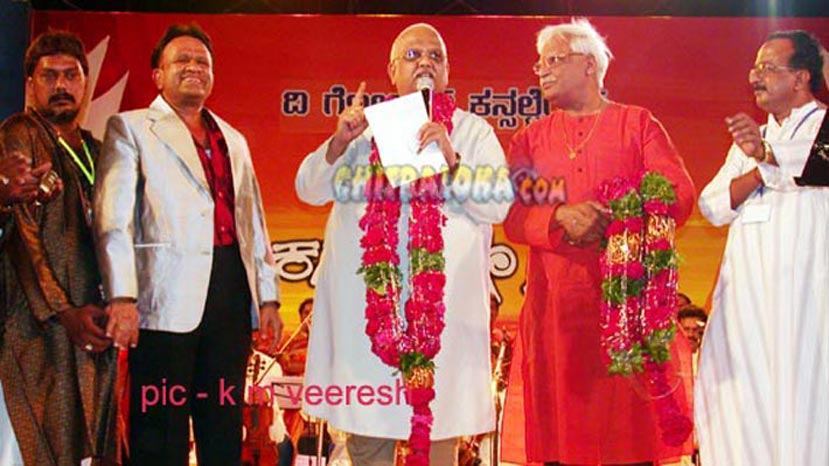 It was mind blowing and heart touching. For the famous poet G.S.Shivarudrappa’s song Yavudhee Pravahavo……, sung by C.Ashwath it was literally the flood of people at the Bangalore Palace grounds. Occasion – ‘KANNADAVE SATHYA’ light music extravaganza on Saturday evening. According to one expectation the attendance was from 40000 to 50000 people to hear the rich lyrical strength of Kannada literary giant poets.

I feel that an artist should get this type of an atmosphere and stage to sing. I feel my life is fulfilled. ‘Yee Dina Sarthaka Dina’. I have been waiting for this platform for a long period. SPB on this evening has added extra dimension to the program. He is the one singer I always admire Ashwath addressed and promised to the crowd that singing of this evening will be of very high quality.

The massive crowd coming towards Bangalore Palace grounds thus leading to traffic jam forced the Global Consultants to begin the musical extravaganza and then start the inauguration. It was inauguration after singing began to the massive music lovers waiting for hours.

Dr. S.P.Balasubramaniam who inaugurated the evening felt immensely happy to be on this occasion. On the insistence of the crowd he sung C.Ashwath composition Yariguntu Balu Bevu Bella….. song. He expressed his happiness for having worked with C.Ashwath as a singer. C.Ashwath is not just an artist. He is wonderful personality with good heart SPB complimented. This is the stage today that would not give you political speeches and cinema songs. But it will showcase the rich cultural value of the state Karnataka addressed SPB who appeared clean shaven as he has tonsured his head and long beard that he had grown recently.

Yet another cynosure on the evening Ambarish was thrilled with the massive attendance. This is the first time I am seeing huge crowd for a Kannada program in Bangalore Palace. The Bangaloreans have proved that they love Kannada language. You have showed the love and affection. Had this crowd not been here it would not been an immaculate function Ambarish addressed the booing crowd.

One of the key persons of Global Consultants Prabhakar Rao speaking on the occasion said his effort is very minute in spreading the culture and tradition of Karnataka. G.S.Shivarudrappa considered this occasion as very special and he said it is not talking time but singing time.

The mega event was not free from confusion. The media had a tough time to get in. In free for all cases all these are bound to take place. It was a musical chair situation. But all sundry disturbances were superseded by C.Ashwath singing.

Nearly 10 children were missing in the middle and all of them safely landed on the lap of their mothers.

Congratulations Global Consultants! You have made it successful.