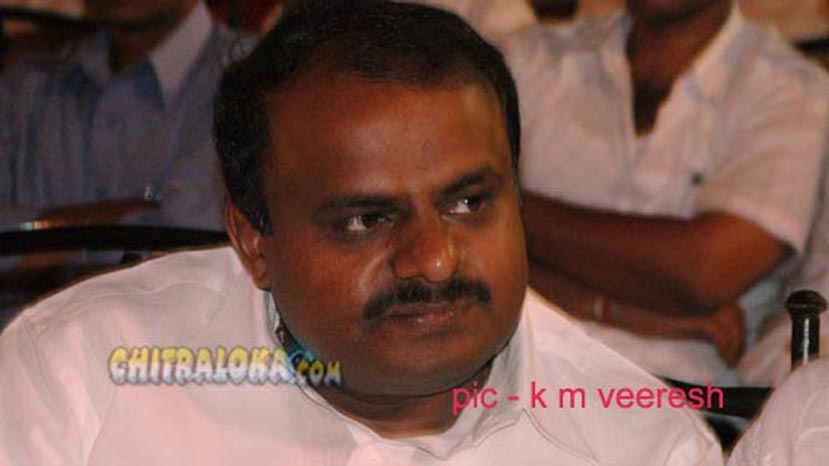 The Karnataka chief minister H.D.Kumraswamy after receiving the honor bestowed on him by the Karnataka film chamber of commerce urged all the industry members to come and attend the Vishwa Kannada Sammelana to be held in November on the occasion of 'Suvarna Karnataka' at Belgaum. That day I would be happy and completely accept today's honor said the CM. He invited Amabrish, Dr.Vishnuvardhana and Shivrajkumar to take leadership to get the filmdom to the mega event of Kannada.

The Karnataka CM felt very bad for not meeting the icon of Kannada cinema Dr.Rajkumar after taking over as CM. This would remain in my memory for ever he said and remembered the works he has taken up in life that are only after watching the Dr.Rajkumar films. Without any experience in power I am trying to give answer to the problems that I have seen from Dr.Rajkumar moral based films he admitted once again.

For the repeated call of the film industry to clear all the demands the CM said he would give solution to all the demands. In a twenty minutes speech the CM went down in his memory and recalled his first film association 'Nethra Pallavi' 21 years ago. When I paid high price to Kannada films to increase its market some of them complained to my father that I am in the wrong steps.

Answering the demand of Member of Parliament Ambarish he said he is interested in giving sites at less cost to all walks of people. I would like to eradicate the barrier between the rich and poor the CM said in his non stop speech at Bangalore palace on Sunday evening.

On his proposed television channel 'Kannada Kasturi' he said he has taken up it as a challenge when someone said no Kannadiga can start a private channel. This channel is your film industry channel he said coming back to mike once again.

The right speech came from Dr.Vishnuvardhana and Shivrajkumar. Both of them said the Karnataka CM knows very well what to do for the film industry. He has the luck and opportunity added Vishnu in his speech. The Chamber President Gangaraju also came very near to this speech.

This is what should be said instead of listing the demands!

Rebel star Ambarish requested the chief minister to sanction the loan for construction of Artistes Association.

Veteran actress B. Sarojadevi expressed her long lasting wish   a film personality should become the chief minister. This has happened through Kumaranna and I had once asked him in United States of America Sarojadevi brushed her memory. Actress Jayanthi considered the position of Kumaraswamy as a unique and it is the Punya of state. She wished him to continue with the progressive work in his regime as CM.

Master Kishen the world famous director at the age of 9 sung the inaugural song. Two songs from Chandra Chakori and Sinhadriya Simha lyrics were changed to suit the honor for Karnataka CM. Director S.Narayan made the changes and it was apt.

Global Consultants trio made arrangements of the stage in a very colorful style.