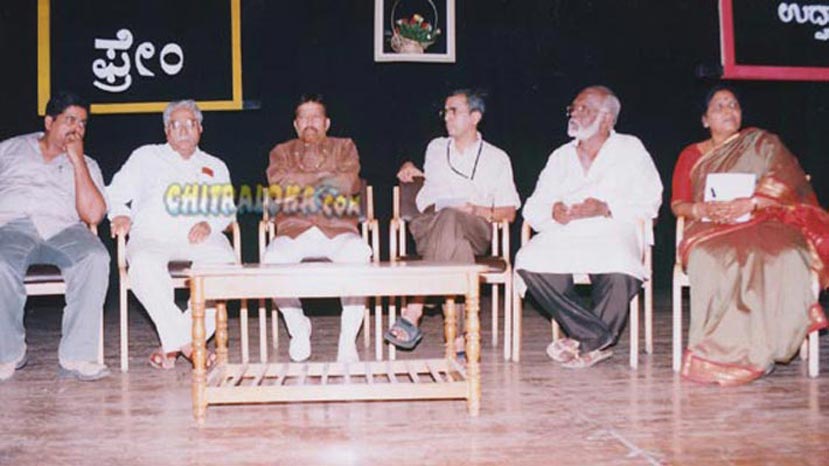 The septuagenarian street plays father, theatre activist, senior film journalist all rolled in to one A.S.MURTHY has set yet another trend of one month of workshop in acting for Film and Television interested persons at Abhinaya Tharanga in Hanumanthnagar. The month long workshop ‘FRAME’ beauty is that the participants from all over India get to know what is acting from top personalities in Kannada besides getting a feel of technicalities of film production. What the giants are doing by charging heavy fees all over Murthyavaru is giving a lovely contribution via Frame.

A few days ago A.S.Murthy and Gauri Dattu organized the inaugural function of ‘Frame’ at Nayana Hall adjacent to Ravindra Kalakshetra in Bangalore. Superstar Vishnuvardhan inaugurated the ‘Frame’ through his signature. Along with him Dr.Chandrasekhara Kambara, C.S.Kedar secretary of Kannada and Culture department and senior journalist H.Girish Rao alias Jogi were on the dais to give their opinions on acting.

Mr Jogi, senior journalist in popular Kannada Prabha daily a member of ‘Frame’ committee gave some useful tips and opinion on acting in his speech. An actor should remain in frame but still has to come out. He recalled a Sanskrit poem and described the position of an artist from his reel to real life. An actor should express through his language and acting. But in today cinema and television if an effort is made to teach the language it is enough. Acting could be learnt by continuous performance Jogi felt. In today’s world no child say that he wants to become an actor. But in those days an actor like Vishnuvardhan just from his performance in ‘Nagarahavu’ has excelled every friend of his. That height is possible for persons like him. According to me an actor is like ‘Purushottama’. The shining glowing star we always remember ‘Dhruva’ was also a human being and then only he catapulted to such a position. I feel it is enough of talk from my end Jogi cut short his rain of thoughts in a witty style and that aroused laughter in the packed auditorium.

Vishnuvarhdn in his speech agreed that the concept is good. Artist work is captured in a frame is available on big and small screens. According to me acting is equivalent to College and an actor is a student in a classroom. I am still a student Vishnu admitted once again. These 30 years of long stay of mine has come from ‘Yoga’ and not ‘Yogyathe’. There are many students like me still learning in the classroom. This learning process has started from ‘Frame’. I wish all the best for A.S.Murthy’s brainchild ‘Frame’ Vishnu added.

For this studying classroom I welcome everyone. This A.S.Murthy is a wonderful man with potentiality. From 1981 under ‘Abhinaya Tharanga’ is doing one or the other work expressed the giant Dr.Chandrasekhara Kambara in his speech. According to me Vishnuvardhan is one of the top actors of this world cinema. In all the films he has acted he remained a different individual and we can easily say we have seen so many Vishnuvardhanas. But sadly acting is not taken seriously besides having a poor knowledge about the language. For me acting is 50 percent art and 50 percent is discipline. When the Hollywood people are making good films without subjects why we are lagging behind with subjects is the question mark in my mind said Kambara. Acting is not imitation or entering into that role but it is INTERPRETATION opined Dr.Kambara in his address.

M.D.Pallavi sang the opening song. Inspired with such a mellifluous song the Secretary of Kannada culture C.S.Kedar also sang a song to invoke the rain God. Dr Kambara on insistence also showed his singing capacity is in tact.

Mrs Gauri Dattu explained the intentions of ‘Frame’ in her address. Venkatesh proposed a vote of thanks.