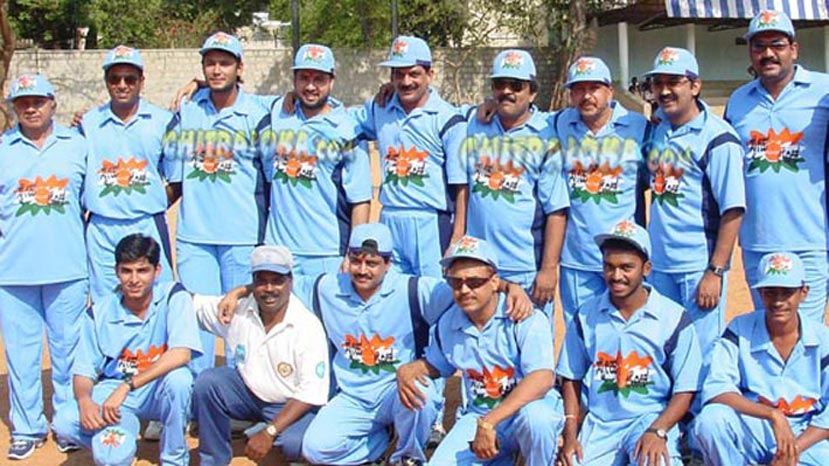 It was a sensible and funny morning for the cinema journalists and cinema actors. The occasion – limited over cricket match played at St.Joseph’s School ground at Museum Road in Bangalore on Sunday morning. The duplicate Sachin Tendulkar and Virendra Sehwag graced the occasion and both played the second match.

The two limited over cricket match besides bringing together the two fraternities very close rendered an entertainment. Thanks to Ambarish the ‘Snehajiveei’ of all and superstar Vishnuvardhan for making the success of this first cricket contest between cine journalists and cinema stars.

The active presence of producers like Vijayakumar, K.Manju and veteran actor Shivaram was also supportive for the conduct of the match successfully. The tight discipline insisted by superstar Vishnuvardhan further increased the interest of the match.

Well done Darshan, Saurav, Shobaraj from cinema fraternity and Indrajit, Mallik, Sanath, Prashanth, Shenoy and others in the first 15 over cricket match. Batting first ‘Snehaloka’ headed by Vishnuvardhan as Captain scored 105. Darshan topped the score. Chasing the total the cinema journalists made 83 runs for the loss of nine wickets in 15 over.

In the second match of 10 over the ‘Snehaloka’ team scored 65 runs and cine journalists chasing the total made 68 runs with one over remaining and five wickets in hand.

Why the matches played were interesting is because of the presence of thick pals- Ambarish and Vishnuvardhan. For every shot played and good ball bowled Ambarish encouraged irrespective of the team. When he disclosed his happiness to bat first in the second match he came along with Vishnuvardhan and two runners. This ‘Diggajaru’ did not lost long on the crease. Ambi was caught for the first ball and he asked the opponents to consider it as a grace ball. Later he went on to play for 13 runs. The superstar Vishnuvardhan not scoring much of runs got bowled to Paramesh Gundakal bowling and soon Ambarish also got bowled. There was good batting from K.M.Veeresh of Chitraloka mega portal and Siddaiah Hiremath of Prajavani Kannada daily.

Actresses Bharathi Vishnuvardhan, Sumalatha Ambarish, Thara, Arundhati Jathakar, the two daughters of Vishnuvardhan were also present. Actress Bharathi cutting jokes infused lot of interest among the players and she was attached to this play very closely. When the fielders failed to catch the ball she kept on asking the players to look at the balls coming direction. Shobaraj created a very funny situation when duplicate Sehwag was not able to meet the ball properly. Shobi came running with a mobile for duplicate Sehwag. Coinciding the advertisement of Sehwag in which he was about score a winning shot and he gets a mobile call from his mother saying ‘Karlo Duniya Muttime’.