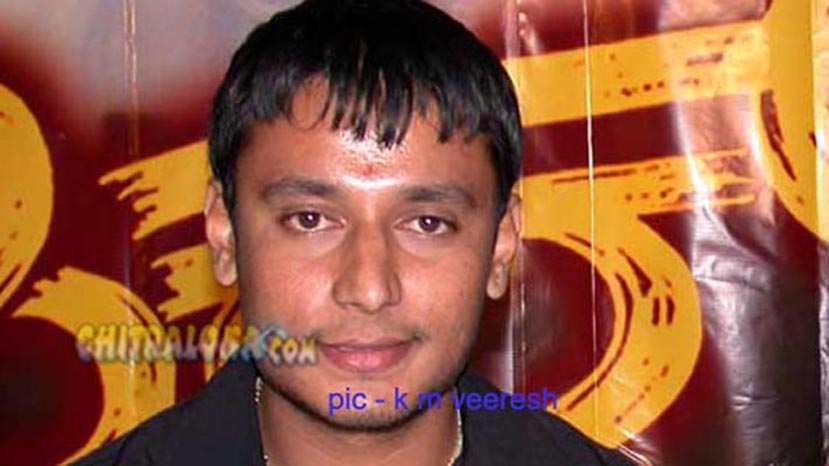 The popular star of Kannada cinema Darshan Togudeepa had to bat for bouncers from the children at a mock court hall set by the famous cultural troupe of Karnataka ‘Vijayanagara Bimba’ under the leadership of veteran theatre personality, actor and senior journalist A.S.Murthy.

In a nicely prepared set the asset of Kannada cinema Darshan was in the witness box and actress Shruthi with 99 films to her credit in Kannada was in the gritty position of a Judge. Around 10 children decked in lawyers costume on the opposite side of witness Darshan put the questions.

This is one ‘Kiriyara Katekateyalli Darshan’ (Darshan in children court) is among the many cultural events of ‘Bimba’ a subsidiary of Abhinaya Tharanga in Hanumanthnagar which is doing decades of wonderful service in the cultural field.

We bring you some of the highlights of ‘Darshan in Children Court’:

Darshan is the name given my ‘Paapa’ Mysore Srinivas who later became Togudeepa Srinivas. He picked the names of his children from a song. It is ‘Divya Darshana Dinakara’. The other two are my sister and brother.

After the hit of ‘Kariya’ Kannada film I did not want to change it as ‘Biliya’ Darshan, or I did not want it to be ‘Majestic’ Darshan after I got a big break from that film. For me my Paapa what he earned from his first film Togudeepa is sufficient. To recognize quickly I have added ‘Togudeepa’.

For me Mysore is a very loving place. For friendship Banglore is best.

Why are you harping on ‘Kariya’ Kannada film alone? I have done ‘Laali Haadu’ that says a goal is important in life, I have done ‘Kitty’ that says education should not be mixed with politics I have done ‘Dhruva’ that informed politics should not come to College campus. There are number of rowdies in the film and you must know one thing that their heart is sweeter than you children. There is a message in the - end murder for money is bad.

Money is important. Two years ago I was moving in Kinetic Honda and today I am moving in a German made ‘Skoda’ car. Likewise the competition also should be there. I have competition in my acting career from Sudeep, Puneet and others. I watch all their films to remain different in my films.

When I came to this industry I had nobody. My father was not next to me. Have you seen National Geography Cheetah episode. For the cubs the elder Cheetah brings a deer in its hunt. Then all the cubs start playing with the deer. After looking for sometime the elder Cheetah tears the deer and feed the cubs. To some extent this is relevant to me also. When I was innocent lot of charges came up on me for no mistake of mine. I always think of my father. In case he would have been unaffected.

For me Ba.Ma.Harish and Rammurthy - my God father. My mother is God to me.

I have played dramas in Ninasam before coming to films. I still have the intention of playing dramas. The theatre should grow. Like how Naseeruddin Shah, Nana Patekar and Amrishpuri come on stage the similar growth I would like to see here also.

I said in a loud voice ‘I Love you’ to my relative with whom I am getting married in this month. Our marriage is fixed long time ago. Had I opportunity without this I would have had girl friends.

Darshan also twisted his eyes and showed children how he played a difficult role in ‘Nanna Preethiya Ramu’. She rendered dialogues from his famous film ‘Majestic’.

Known for her tear- jerker roles actress Shruthi really performed very well in the capacity of judge. She gave a patient hearing to the question and answer session from child lawyers to witness.

Money should not be the sole intention of a producer opined Shruthi. Films should have good impact on the society and Darshan should imbibe what Dr.Rajkumar and Vishnuvardhan possess as good qualities in his roles. The films should be watchful by the entire family. It is not enough you say that theatre is still interesting. Show the interest Shruthi ordered.

Shruthi also made a fervent appeal. As it was the children court she picked the idea of stating that children should be given top prominence. When a child comes to your doorstep asking for food. Give that child food, education and love. That’s how you can construct a healthy society observed Shruthi. Is she practicing what she is asking us to do?