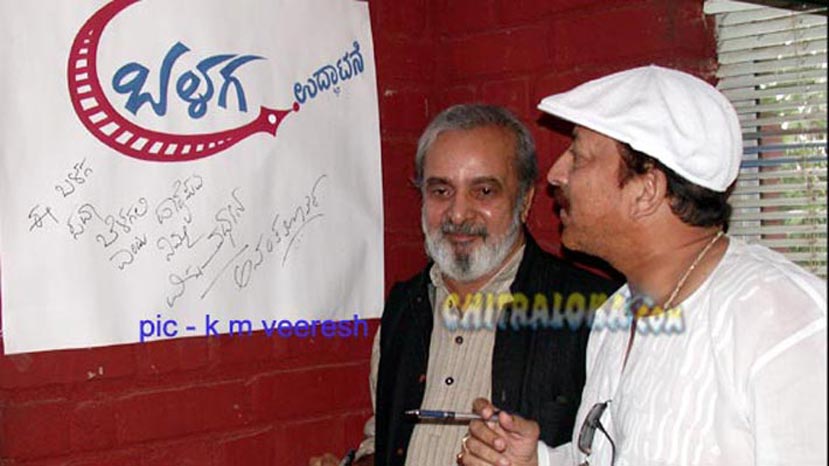 The Kannada cinema journalists association ‘Balaga’ was formally inaugurated in a simple and tidy function on Sunday evening at Press Club of Bangalore. Gnanpeeth award winner Dr.U.R.Ananthamurthy and superstar Vishnuvardhan jointly inaugurated the ‘Balaga’ that has many useful and meaningful objectives in its kitty. Both the renowned guests conveyed their wish by signing on a board meant to write their wishes.

Let ‘Balaga’ belagali described Vishnu in his address. Better late than never you journalists friends have come up collectively. Let your objectives and good work flourish wished the superstar. Recalling his association with media friends Vishnuvardhan disclosed he has grown up reading newspapers and journalists are a part of his growth. Media is like a ‘Suvarna Sethuve’. The collective objective is difficult to find these days. At this age and stage anything can happen. A small light can brighten the prospects. Let this ‘Balaga’ grow heaps and bounds added Vishnuvardhan.

The chief guest on this occasion Dr.U.R.Ananthamurthy as soon as he began his address remembered the late veteran journalist Y.N.K. The new wave in film journalism is possible because of this stalwart writer. Comparing the reporting and analysis of film, sports and commerce with politics he informed that there is no serious reporting done in all the three areas. A well thought analytical reporting on a film or a hero should be welcomed rather than criticizing it. The ‘Balaga’ that has started today should not have a biased nature. It should create a good platform for discussion and uplift the fraternity in good spirit hoped Dr.URA.

A tidy one hour Balaga inauguration function was conducted in a effective style by noted journalist S.K.Shyamasunder. The whole function ended just like a discussion instead of being routine one.

The leading lights – P.G.Srinivasamurthy outlined the aspirations of the ‘Balaga’ while A.S.Murthy proposed a vote of thanks. The President of Balaga H.Girish Rao- Jogi and Secretary of the sangha Prashanth Rai were present on the dais.