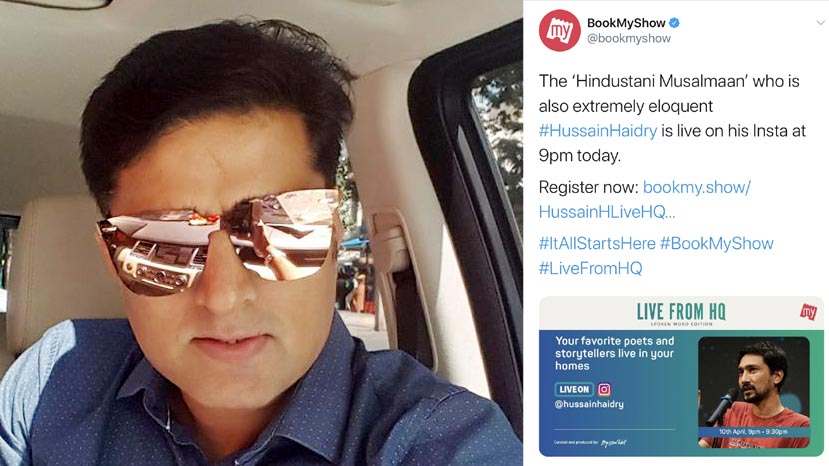 Nationwide lockdown due to coronavirus has resulted in the entire entertainment industry coming to a grinding halt. However, many artists are reconnecting with their audience through online medium.

In such a scenario, the controversial on-line ticketing platform - Book My Show, which has been time and again criticised for its acts especially concerning Kannada film industry, is being heavily trolled across various social media platforms after it announced a show featuring Hussain Haidry on his Instagram account.

The netizens slammed Book My Show for the alleged communal interaction. The online platform is being trolled along with the hashtag 'UninstallBookMyShow' and 'Uninstalled'.

Reportedly, Hussain Haidry had made alleged communal remarks in the past following which the netizens strongly condemned BMS for associating with such show, and are uninstalling the application as a sign of their disapproval.

Who is Hussain Haidry?

Hussain Haidry is a Hindi poet, writer and lyricist. He gained unnecessary prominence when his poem Hindustani Musalmaan went viral on social media. He is an anti-Hindu, anti India Bigot, who does not respect Hindu religion. He spreads wrong message that “Hindus are terrorist”. Please refer to the screen shot (his twitter account is suspended though).

Book My show is promoting his poem recital show and is streaming live his infamous poems against Hindus. Hussain spreads hatred towards our religion, on Hindus and vicious expression against Hindu organizations, and Indians at large.

With misuse of Freedom of expression, He is been promoted on the digital world, by Book My show app, against the interest of larger united India.

Even after repeated request by me and other fellow Indians, on mail to the admin and management of  book my show about his  inflammatory, anti national stand , his  poem reading  event  is been promoted  on book my show,  our request to cancel event has fallen on deaf years of the management.

If Book my show can’t act and respect our feelings and sentiments, we need to act on our own to protect our identity and Nationalistic ethos. So we have taken this issue in our own hands by deleting the app from our mobile, uninstalling the same, and sending a very strong message to the anti India mind set of BOOK My Show and Hussain Haidry.