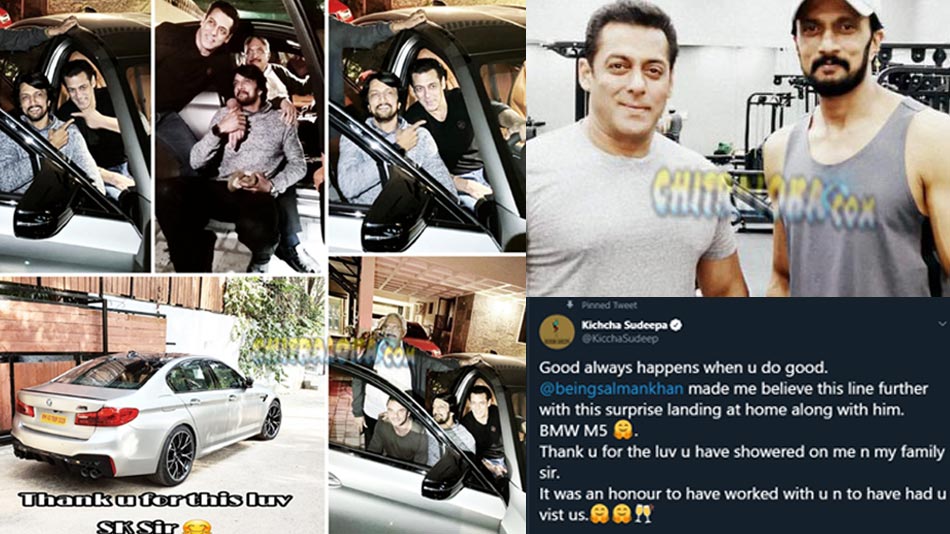 Bollywood star actor Salman Khan and his friendship with Sandalwood's Abhinaya Chakravarthy Kichcha Sudeepa is a well known fact, which has reached another level with Dabangg 3 featuring both the actors on a single frame.

While Dabangg 3 is running successfully across the globe with a steady growth at the box office, the makers of the movie are celebrating its victory.

Recently, Salman himself flew down to Bengaluru, to pay a visit to his friend and Dabangg 3 co-star Kichcha Sudeepa. That's not all, he even gifted Kichcha with a swanky car (BMW M5). He was seen posing with the car along Kichcha Sudeepa and his father Mr. Sanjeev at his residence in Bengaluru

"Good always happens when you do good. Salman Khan made me believe this line further with this surprise landing at home along with him. BMW M5. Thank you for the love you have showered on me and my family sir.  It was an honour to have worked with you and to have had you visit us," Kichcha shares.