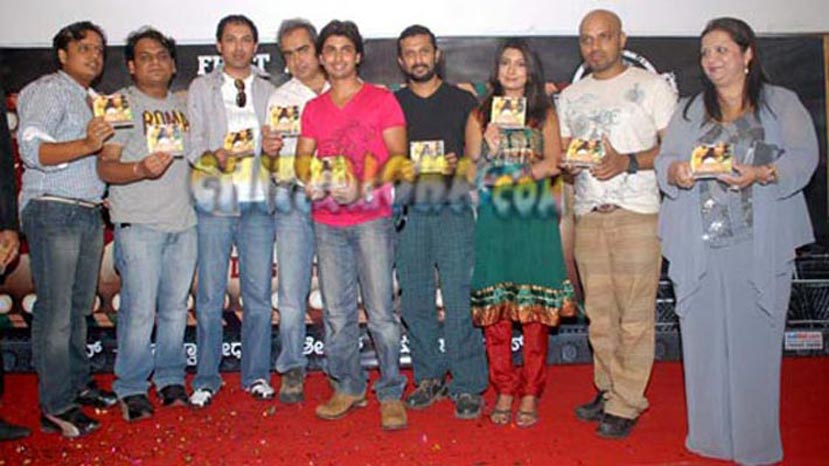 The audio album of Prashanth Raj directed new film Gaana Bajaana starring Tarun and Raadhika Pandit was released in a function held on Monday . The entire unit was present during the launch and it was the first press meet for the Gaaja Bajaana film unit which has completed its shooting. The film's shooting was held in Mysore and the songs of the film have been shot in Bangkok.

The film's producer Naveen, director Prashanth Raj, the film's artists Radhika Pandit, Tarun and Dileep were present during the function. A promo of the film and also the video of the making of the film was also shown to the media along with three songs of the film. The music of the film has been composed by Joshua Sridhar. Anand Audio Company has released the audio album of the film.

Talking about the film, Prashanth Raj said that the film is a trendy, youthful film with focus on comedy elements. He said that he had chosen veteran artists like C.R.Simha and Lakshmidevamma in important roles for the film and they have performed their roles tremendously. He has repeated the main artists of the film and shooting for this film was a great pleasure.

The songs picturisations were really stunning and it looked as if Prashanth Raj has used state of the art techniques to can these songs with taste and class. Raadhika Pandit who looked quite glamorous in all the songs and seqeunces of the film said that she was very happy to work again with the Love Guru unit and hoped the film to hit the jackpot. The film's hero Tarun said that the whole unit has put in lot of hard work to get the mood right for the film.

Joshua Sridhar who had composed some amazing songs for Love Guru said that the songs are youthful and trendy. "I found the song picturisations hundred times better than in Love Guru' said Joshua Sridhar.