Shanvi Srivastava Has A Message For Her Colleagues 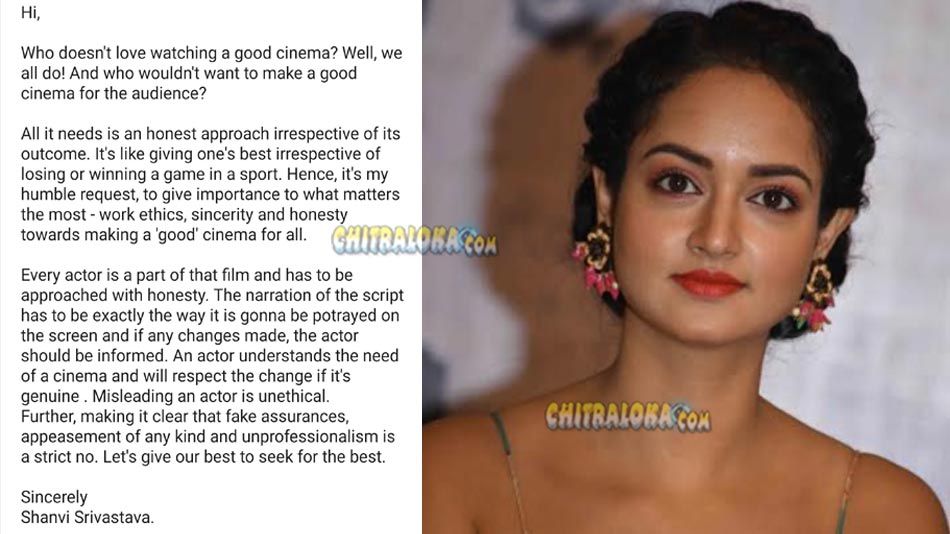 Popular actress Shanvi Srivastava, who is basking upon the success of Geetha, has a message for all her dear colleagues in the film industry.

Her biggest film - Avane Srimannarayana, which is set to hit the theaters in November. The actress has put out an open message on her micro blogging site, which reads: "Who doesn't love watching good cinema? Well, we all do! And, who wouldn't want to make a good cinema for the audience? All it needs is an honest approach irrespective of its outcome. It's like giving one's best irrespective of losing or winning a game in a sport. Hence, it's my humble request, to give importance to what matters most - work ethics, sincerity and honesty towards making a 'good' cinema for all".

Further she says that every actor is a part of that film and has to be approached with honesty. "The narration has to be exactly the way it is gonna be portrayed on the screen and if any changes made, the actor should be informed".

"An actor understands the need of a cinema and will respect the change if it's genuine. Misleading an actor is unethical. Further, making it clear that fake assurances, appeasement of any kind and unprofessional ism is a strict no. Let's give our best to seek for the best," she writes.

The actress is yet to explain the reason behind writing such an open letter. Though the sudden message has surprised many, her honest appeal is winning many hearts in the industry especially her fans.