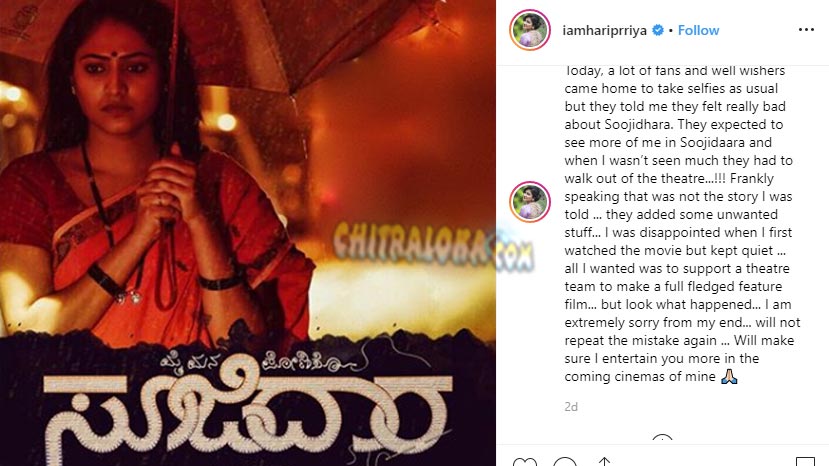 Actress Haripriya has said that she is very much upset about her new film 'Soojidara' which was released last week. The actress has said that it was not the story she was told earlier.

Haripriya in her Instagram account has expressed that she has let down her fans with 'Soojidara', 'Hey people, sorry sorry and sorry again. My regular fan interaction Sunday turned out to be a thought provoking one instead. Today, a lot of fans and well wishers came home to take selfies as usual, but they told me they felt really bad about 'Soojidara'. They expected to see more of me in the film and when I wasn't seen much they had to walk out of the theaters. Frankly speaking that was not the story I was told. They added some unwanted stuff. I was disappointed when I first watched the movie but kept quiet. All I wanted was to support a theatre team to make a full fledged feature film. But look what happened. I am extremely sorry from my end. Will not repeat the mistake again. Will make sure I entertain you more in the coming cinemas of mine' said Haripriya,

'Soojidara' is a woman oriented film being directed by theatre personality Mounesh Badiger. This is debut film as a director. The film stars Haripriya, Yash Shetty, Achyuth Kumar, Suchendra Prasad and others in prominent roles. Ashok V Raman is the cinematographer.