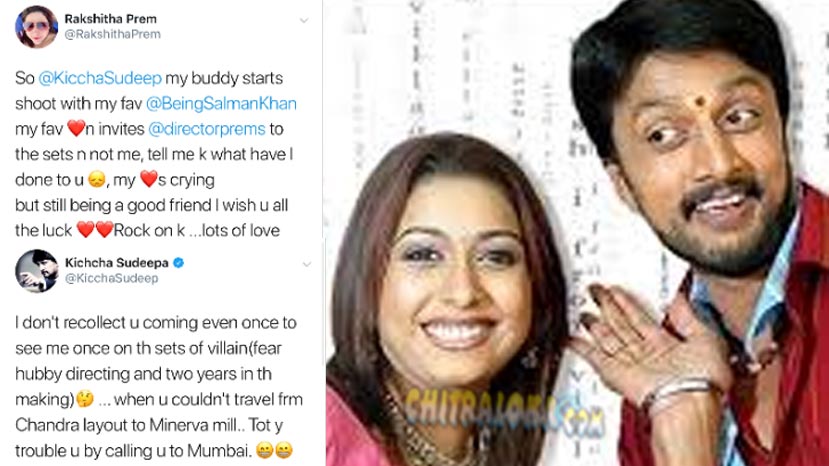 Actress turned producer Rakhitha Prem, who is busy these days producing her maiden venture 'Ek Love Ya' through her production house Rakshita Film Factory, introducing her brother Raanna, is heart broken, and the reason behind it, is one of her closest friends in the industry - Kichcha Sudeepa.

Disappointed over not being invited to the sets of Dabangg 3, Rakshita Prem has openly expressed it to Kichcha Sudeepa asking why he chose to invite her husband Prem to the sets of Bollywood movie which features her favourite actor Salman Khan and not her.

She goes on to write to him asking on what has she done to him for not inviting her because of which her heart is crying. However, she wraps it up saying that she being a good friend wishes him all the very best for his act in Dabangg 3.

Reacting to Rakshita's complaint, Kichcha who is always at his witty best, explains on why he chose to do so. "I don't recollect you coming even once to see me on the sets of The Villain (fearing hubby directing and two years in the making). When you couldn't travel from Chandra layout to Minerva mill, though why trouble you by calling you to Mumbai," Kichcha replies with a naughty smile in the end.