Natasaarvabhowma Release in US & Canada 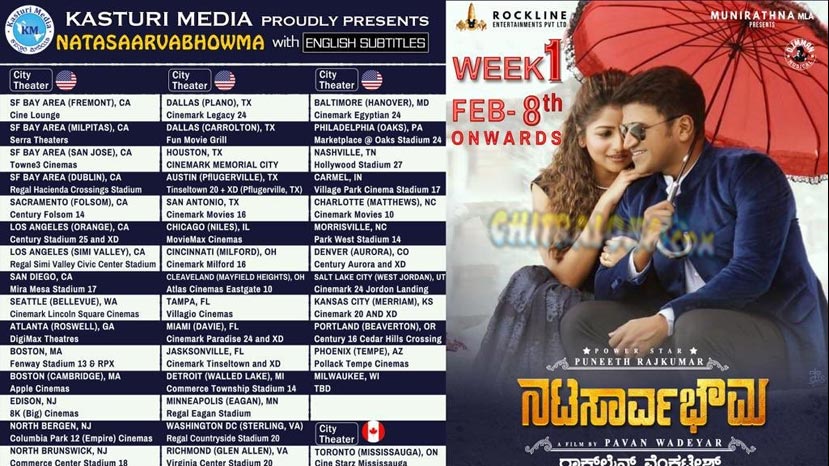 Natasarvabhouma US And Canada Release

Power Star Puneeth Rajkumar who returns to silver screen as hero after a year is back with a bang! His Natasaarvabhowma, which is all set to release in less than 48 hours has raised huge expectations amongst his fans and movie goers.

With shows being booked in advance for weeks, Natasaarvabhowma is also gearing up for release in the U.S., and Canada from February 8. With at least 45 theatres ready to screen the movie in various states of the America and Canada, the second week will have another set of additional list of theatres in cities such as New York, Manchestor, Bloomington, Orlando, Las Vegas, Raleigh and others.

The movie which is being distributed worldwide through Movie Mart, has planned to release the movie in most parts of the globe in the coming weeks.

Back in the state, Natasaarvabhowma directed by Pavan Wadeyar and produced under Rockline Entertainment Pvt Ltd, is releasing in record number of theatres with shows starting as a early as 12 am. In Urvashi theatre alone, the movie will be screened non-stop for 24 hours. A power star fan has booked an entire show for himself. Go grab your ticket for a power packed entertainment.