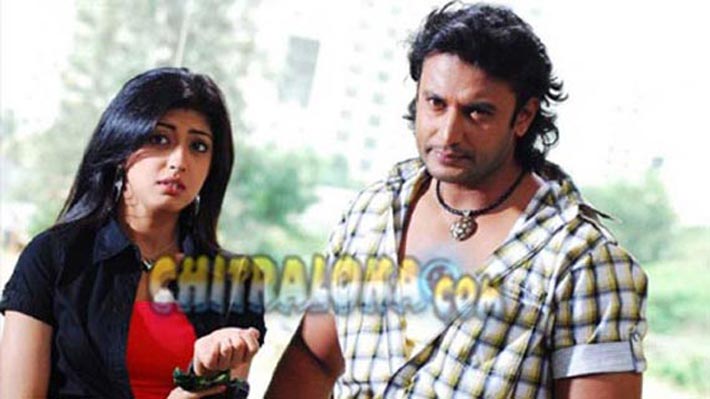 Challenging star Darshan starrer Porki will be completing a hundred day run this Friday and will be the first film in this year to complete a hundred day run . The success of Porki follows Puneet Raj Kumar's Raam which was released during last December end which also completed one hundred days in many centres.

Infact it was the huge collections of Raam and Porki which started the success story of the Kannada film industry which was in dumps with a series of failures. Then of course everyone knows the big records that Dr. Vishnuvardhan starrer Aaptha Rakshaka is creating and still continuing to roar in the Box office. Now, recently through Premism has had not a big run it has been branded as a successful film considering its cost of production and returns at the Box office.

Porki is produced by Datta and directed by Sridhar. Newbie girl Praneetha is the heroine of this film, while Shobharaj, Avinash, Ashish Vidyarthi, Sadhu Kokila, Sharan had played other important roles. Hari Krishna had scored the music of this film, while K. Krishna Kumar is the cameraman. Porki has completed a continuous one hundred day run in Moti theatre in Davanagere and in other centres like Mysore, it has been able to complete after migrations in other theatres.

Despite a poor pre release publicity and not so good designs, Porki took a fantastic opening all over. If only the producers had focused on a little more publicity in television channels, websites and outdoor publicity platforms, the film would have still done wonderful business, say people from the trade. Now, the producers have sold the film to Radhakrishna, a respected distributor who is now using all his guile to fully realise the potential of the film.

Though the producers have not shown any interest in releasing the 100 day ad of the film, Radhakrishna feels that the film fully deserves a hundred day run publicity. The fact that Darshan is one of the biggest star to have a bigger level of charismatic appeal in the Box office is too well known. But in the case of Porki, the original Telugu version and the later versions of Tamil and Hindi were released to a huge response in the state. But still Porki which had a good making with huge production values was able to collect well in the Box office mainly due to the appeal of the challenging star. The film has done extra ordinary business in the B and C centers where neither Porki or its remake version of other languages have not released. The film has done a business of around Rs. 1.25 crores in Mysore, Mandya,Kodagu, Hassan, Chamarajanagar districts alone which is very good and comparable to business of other box office hits. The collections are not all that great in Bangalore and Northern Karnataka districts, but in other places it has done fantastic business which reinforces the Box office stamina of Darshan.