Rashmika's Love For Her Fans 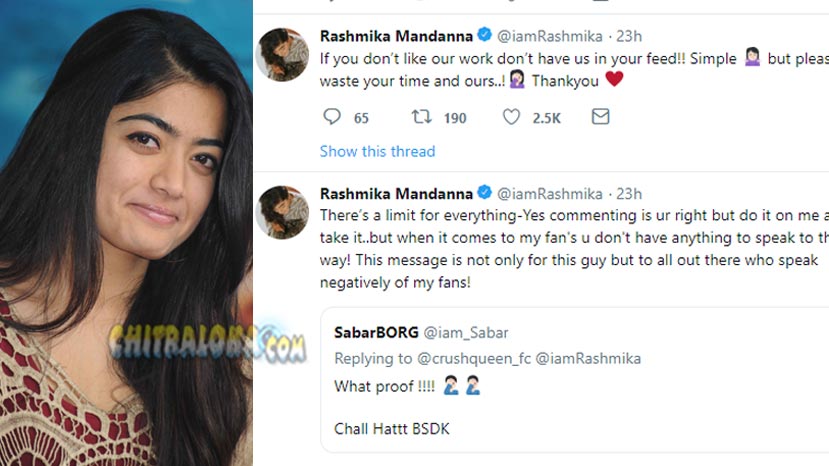 Rashmika Mandanna's love Towards Her Fans

The Coorg beauty, Rashmika Mandanna who has stolen millions of hearts through her lovely performances in both Kannada and Telugu movies, has a huge fan following across the nation. And, when somebody makes an attempt to mess with them, it results in none other than the actress herself coming to their rescue with a word of advice to those who speak negatively against her fans.

A fan of hers had posted a tweet saying that Rashmika Mandanna is a YouTube sensation as she is the only heroine in Kannada who has 50 plus million views of a song featuring her and two 100 plus million views in Telugu, to which a netizen termed it as a biggest joke in an offensive manner.

Soon, the actress herself sharply reacted to it saying, “There is a limit for everything. Yes commenting is your right but do it on me and I will take it but when it comes to my fans you don't have anything to speak to them that way! This message is not only for this guy but to all out there who speak negatively of my fans!”

On the work front, Rashmika has 'Yajamana’ in Kannada up for release starring alongside Challenging Star Darshan. Recently, a romantic number from Yajamana witnessed record number of views on social medias.