All Party Meet For Special Screening Of Nikhil's 'Seetharama Kalyana’ 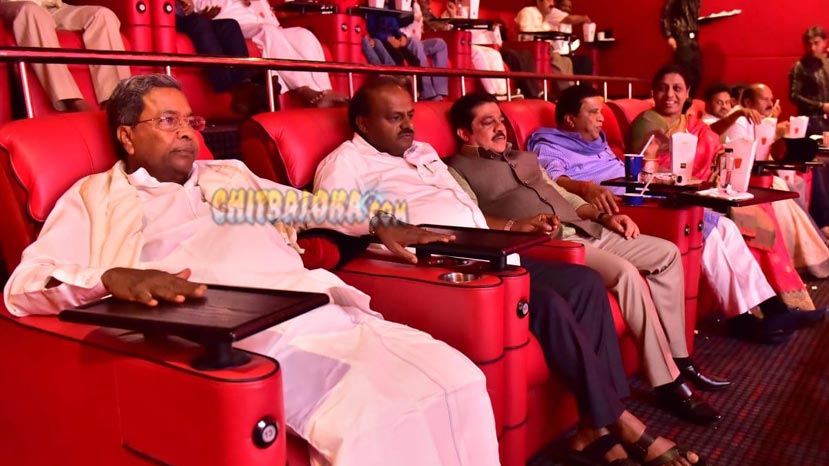 In politics, there are no permanent friends or enemies, and this holds good for all times. On Thursday evening it was one such special occasion in the state politics where leaders across various political parties attended the special screening of ‘Seetharam Kalyana’ movie which stars Nikhil Kumaraswamy, son of Chief Minister H.D. Kumaraswamy, in the lead.

From former chief minister Sri. Siddaramaiah to deputy chief minister Dr. G Parameshwsra, to ministers including Dr. K J George, R.V Deshpande, MLA Zameer Ahmed Khan, and BJP leader K S Eshwarappa amongst several ministers and MLAs and MLCs from JD (S) party were present for the special screening of Nikhil's second movie as hero which is produced under the home banner of Chief Minister H.D. Kumaraswamy - Channambika Films. It is directed by A. Harsha.

Chief Minister H.D. Kumaraswamy, along with son welcomed the leaders, who wished Nikhil, the best and success for his second venture.

The movie which is releasing worldwide tomorrow, has raised a lot of expectations after the trailer which was released at a grand event held in Mysuru became an instant hit. The making video of the movie on Chitraloka's Facebook page itself has crossed more than 2.5 M views within two weeks after it was uploaded.

The movie packed with all elements for a complete family entertainment, also focuses on the agrarian community.