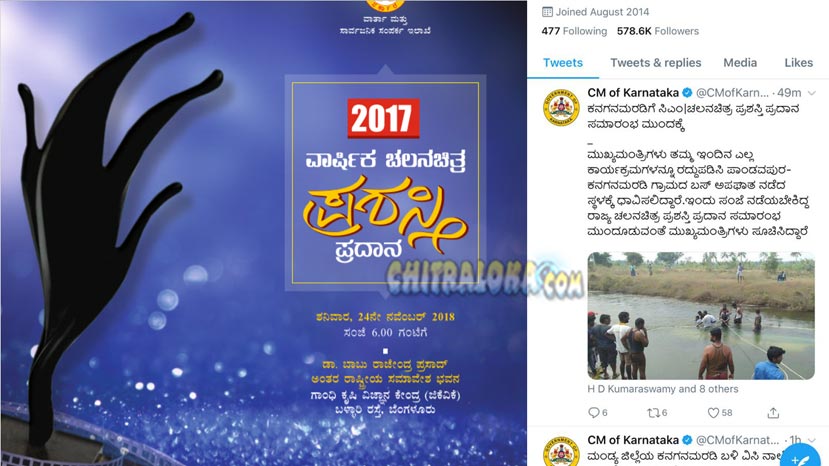 Following the unfortunate road mishap near Pandavapura-Kanaganamaradi village in Mandya, the state has postponed Chief Minister H D Kumaraswamy's engagements for the rest of the day including the State Film Awards function which was scheduled to be held in the evening at Dr. Babu Rajendra Prasad International Conference Hall in GKVK premises.

The function organised by Karnataka Information Department, has said in its statement that the event has been postponed due to the unfortunate mishap and informing that the Chief Minister has already headed to the accident spot to take the stalk of the situation.

Chief minister H D Kumaraswamy was to present the awards to the select winners of the State Film Awards for the year 2017. Several Union Ministers, state government ministers, dignitaries and special guests were invited for the awards function.

Of the many awards, veteran actress Julie Lakshmi was to be honoured with Dr. Rajkumar award, and noted director S. Narayan with Puttanna Kanagal award and G N Lakshmipati was to be awarded with Dr. Vishnuvardhan award.

According to news report, at least 24 passengers are feared dead after a bus plunged into VC canal of the Cauvery river in Kanaganamaradi village of the Pandavapura taluk in Mandya district. It is learnt that most of the deceased are school students.