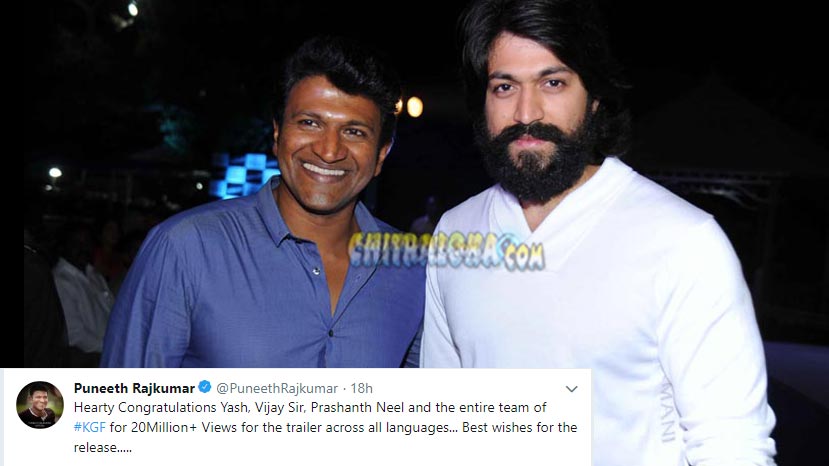 KGF (Kolar Gold Fields), is indeed turning out to be one of the biggest film for sandalwood. With more than 20 millions hits on digital media across all five languages, it is not just receiving positive response from the audience but even celebrities are expressing joy for its tremendous success so far.

After Kiccha Sudeep who shared his views on the KGF trailer, referring it to as an ‘volcano’ which is set to explode, next comes the Power Star Puneeth Rajkumar who tweets on rare occasions, took it up to congratulate the KGF team.

“Hearty Congratulations Yash, Vijay Sir, Prashanth Neel and the entire team of KGF for 20Million+ Views for the trailer across all languages. Best wishes for the release,” he tweeted, and goes on to further inform his fans that he concluded the dubbing of his most anticipated movie 'Nata Sarvabhouma’ which is most probably releasing in 2019 January.

Releasing in five languages on December 21 including Kannada, and dubbed in Hindi, Tamil, Telugu and Malayalam, KGF has been breaking records ever since the trailer of the movie was released on a grand scale.