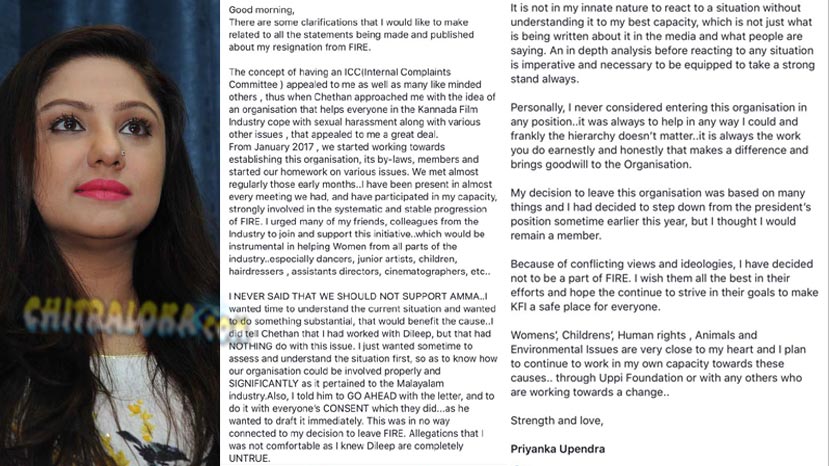 Stating that it was conflicting views and ideologies which made her resign from Film Industry for Rights & Equality (FIRE), actress Priyanka Upendra has clarified in detail her journey in FIRE and what led her to leave it, and her goals ahead in making Kannada film industry a safe place for everyone.

“The concept of having an Internal Complaints Committee (ICC) appealed to me as well as many like minded ones, and thus when Chethan approached me with the idea of an organisation that helps everyone in the Kannada Film Industry cope with sexual harassment along with various other issues, that appealed to me a great deal,” says Priyanka.

She goes on to explain her association with FIRE since January 2017 and how she persuaded like minded personalities in the industry in being part of the body. While coming clean on her stand on AMMA, a Malayalam film association, she says that she wanted time to understand the current situation and wanted to do something substantial, that would benefit the cause. “I did tell Chethan that I had worked with Dileep, but that had nothing do with this issue. I just wanted some time to assess and understand the situation first, so as to know how our organisation could be involved properly and significantly as it pertained to the Malayalam industry,” she explains, adding that she gave her consent to go ahead with the letter addressing AMMA.

“This was in no way connected to my decision to leave FIRE. Allegations that I was not comfortable as I knew Dileep are completely untrue.”

“... My decision to leave this organisation was based on many things and I had decided to step down from the president’s position sometime earlier this year, but I thought I would remain a member. Because of conflicting views and ideologies, I have decided not to be a part of FIRE. I wish them all the best in their efforts and hope the continue to strive in their goals to make KFI a safe place for everyone,” she wraps up saying that she will continue to work on her favourite area which is women’, children's’, human rights , animals and Environmental I which are very close to her heart in her my own capacity towards these causes through Uppi Foundation or with any others who are working towards a change.