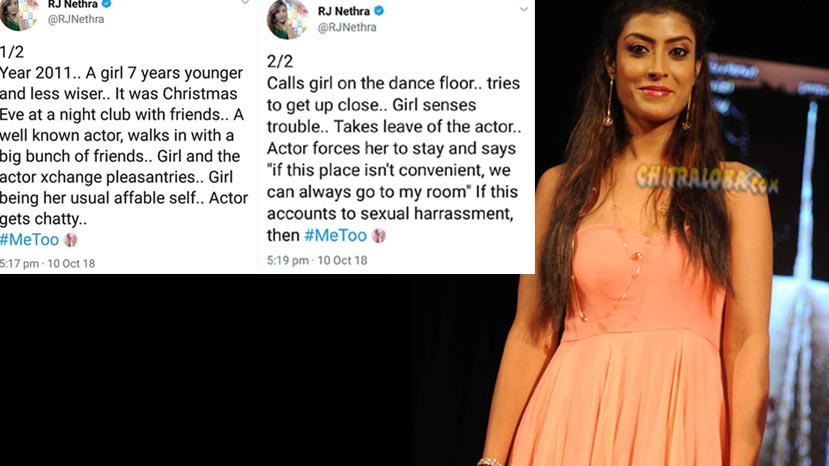 While many victims have named the men accusing them of sexual misconduct, a majority of them have preferred to stay anonymous while sharing their #Metoo stories. And, some have shared such incidents without naming the perpetrators.

Recently, award winning radio jockey turned actress RJ Nethra has revealed her #Metoo incident which she say occurred in 2011 during Christmas eve at a night club while she was with her friends. However, the actress who was last seen in crime thriller '6ne Maili’, hasn't revealed the name of the actor involved in the incident.

RJ Nethra, tweets, “Year 2011. A girl seven years younger and less wiser. It was Christmas eve at a nightclub with friends. A well known actor, walks in with a big bunch of friends. Girl and the actor exchange pleasantries. Girl being her usual affable self. Actor gets chatty…”

She further adds to her tweet, “Calls girl on the dance floor. Tries to get up close. Girl senses trouble. Takes leave of the actor. Actor forces her to stay and says "If this place isn't convenient, we can always go to my room" If this accounts to sexual harassment, then #MeToo.”

Following her tweet, when she was questioned on twitter by one of the person on what was the use of sharing the story when she has no guts to reveal the actor's name, RJ Nethra has hit back saying what is that ‘you’ did for all those names revealed so far? News hungry, gossip hungry!.