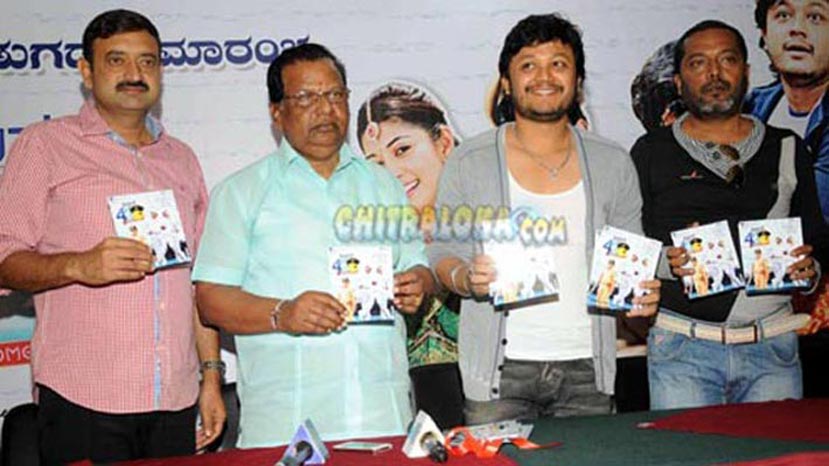 Sandesh Nagaraj said that he initially wanted to remake Tamil Hit "Paiyya' and had engaged B.A.Madhu to write dialogues of the film.

But during  this period, Madhu came up with a story line which impressed me."I told Ganesh to hear the story which was liked by him. Ganesh said that he is agreeable to do the film with Madhu's story. Later we roped in Pradeep Raj who worked for about ten days to make some improvement in the script.  We launched  the film in Bengaluru where fifteen days shooting was planned. Later we did shooting for 25 days. I went on the last day of the shooting again to see the breaking of pumpkin in the evening' said Sandesh Nagaraj.

Though an experienced producer like Sandesh Nagaraj was behind the project, there was not even one press meet organised to provide information about the film. On Monday, all the four people connected to the film gave some information about the film. Prasad said that he was happy to distribute the film all over the state and is planning for release of the film through Basha of Bahaar Films on October 19.

Ganesh said that he had enjoyed working in the film which is nothing but full length comedy. He had experienced artists like Rangayana Raghu and Sadhu Kokila to work with. "There will not be a dull moment in the film. He said that when he heard the final script which was done after Pradeep Raj started working on the project. The film's main focus is only comedy and nothing else. Audience will have two hours of  full entertainment' said Ganesh.  Ganesh plays the role of a pick pocket who moves from his village to the city to make a livelihood.

Director Pradeep Raj that he was able to finish the shooting of the film within forty days of shooting. "Golden Star Ganesh's co-operation was mainly responsible for such a fast work.  Ganesh has done a great job in the film. All the other artists indlcuding the heroine Praneetha have given their best. We have thought off about the characterisation of all the major artists of the film in detail' said Pradeep Raj. He also thanked Sandesh Nagaraj for providing all the necessary equipments to complete the film.

The film's distributor Prasad remembered that Ganesh's film "Mungaru Male' became a biggest grosser of Kannada films though it was made in a small budget. There is nothing like a big or a  small film. I fell for this film after watching the shooting of the film in a few hours. The audio is still better and Hari Krishna has given some top tunes' said Prasad.