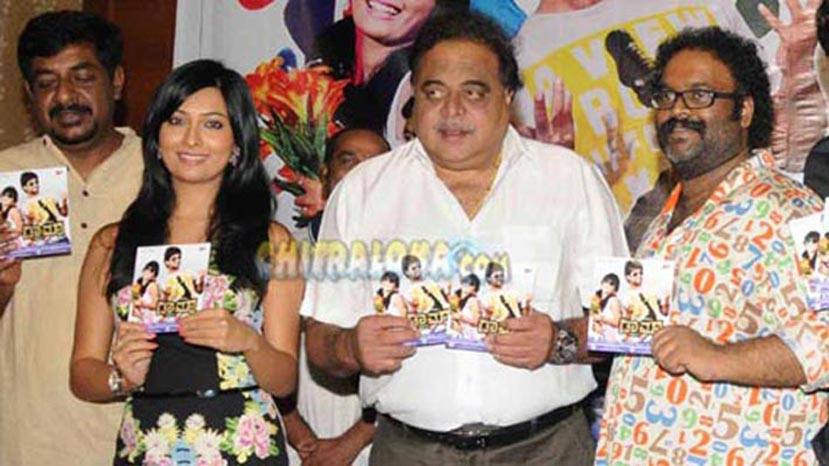 The audio of Kannada film Drama directed by Yogaraj Bhat and produced by Bhogeendra and Jayanna which has been well appreciated by fans and which is already in its third lot of its marketing release was handed over to Rebel Star Ambareesh is a special function held on Tuesday in Bengaluru.  The audio was handed over to the Rebel Star who is also playing a special role in the film by producer Jayanna in presence of the film's leading stars Ambareesh, Radhika Pandit, Neenasam Sathish, director Yogaraj Bhat  and other specially invited guests.

The film's Radhika Pandit, Neenasam Sathish, Sindhu Lokanath, Music director Hari Krishna, Cameraman S.Krishna, Mohan and his brother Shyam of the Anand Audio Company who have released the album were present in the function along with Ambareesh.  Film directors Soori who is now directing Kaddipudi with Shivaraj Kumar and Radhika Pandit and  A.P.Arjun, the director of Super Hit film Adhdhoori were also there as special guests of producer Jayanna.

Rebel Star Aambareesh said that many people were speaking appreciably about the bits of songs and the audio of Drama, but the film's producer Jayanna and director Yogarabh Bhat had now given him the audio even after the  audio release. Jayanna said that he was planning a funciton like this and wanted to hand over the audio and showthe trailers to the Rebel Star in the function.

Before the arrival of the Rebel Star to the function (his late arrival to the function was expected as the political situation had worsened because of the escalation of the Cauvery water dispute agitation and many people had been camping in his residence since the morning), the unit addressed a press conference in the Hotel where the function was organised.  Mohan of Anand Audio said that the response to the audio has even surprised him as already three lots of audio (1000 units per a lot) has been sent to the retailers and they are still getting repeat orders.

Yogaraj Bhat said that Mandya accent lyrics have a special flavour because of the rich folk contained in the spoken language in the region. "I had to do lot of research understanding the richness of the language and it looks the film fans have finally given their nod to the efforts. Neenasam Sathish who hail from Mandya have also helped in getting the right accent which has added to strengthen the reality aspect.  Though the film has different shades, the curiosity value built around the film and the success of audio can be attributed to the strength of the Mandya accent found in the lyrics' said Yogaraj Bhat.

Radhika Pandit said that she was happy that songs have become a major hit and added that  her personal favourite are the Chendutiya and Bombe Adsonu songs.

Sathish expressed his happiness to be part of the Bombe Adsonu song and opportunity to work with a great actor like Ambareesh in the film.