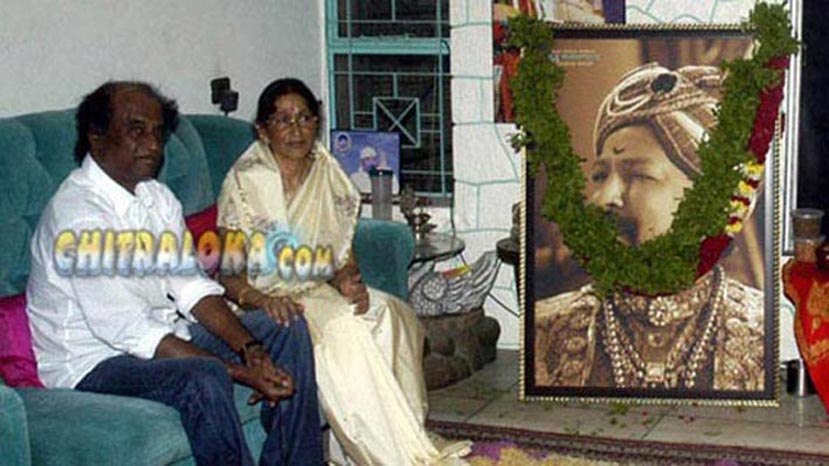 Tamil superstar Rajinikanth visited the home of Vishnuvardhan to convey his condolences to the family members. Rajini was accompanied with his wife and Ambarish. The duo entered Vishnuvardhan's residence at 6.20 pm on Wednesday evening. Bharati Vishnuvardhan and other members of the late actor's family received them.

Speaking to journalists outside Vishnuvardhan's residence Rajinikanth said that his relationship with the late actor was 32 years old. "When I acted with him in films like Sahodarara Sawal and Galate Samsara he was already a big star and I was a newcomer. But his encouragement was like that of an elder brother.

When I got an offer in Tamil it was he who encouraged me to take the offer. He had said that it would make people proud that someone from here would make a big name there. Only people who know him closely can understand what kind of a person Vishnu sir was. I kept in touch with him all these years but could not meet him very often as he was into so many things. He was growing in spirituality and I did not meet him as often as I would meet Ambareesh. I really don't know how to express my feelings here. But I pray to God that his soul rest in peace."

Hundreds of fans had gathered outside the residence of Vishnuvardhan. Rajinikanth waved to them as he left. Rajini was in T Narasipura and Mysore on Wednesday morning and arrived in Bangalore in the evening.

Rajinikanth has acted with Vishnuvardhan in films including Galaate Samsara and Sahodarara Saval. Vishnuvardhan later acted in guest roles in two Tamil films of Rajinikanth including the latter's 100th film Sri Raghavendra. The two have been close friends since Rajini made his film debut more than three decades ago.