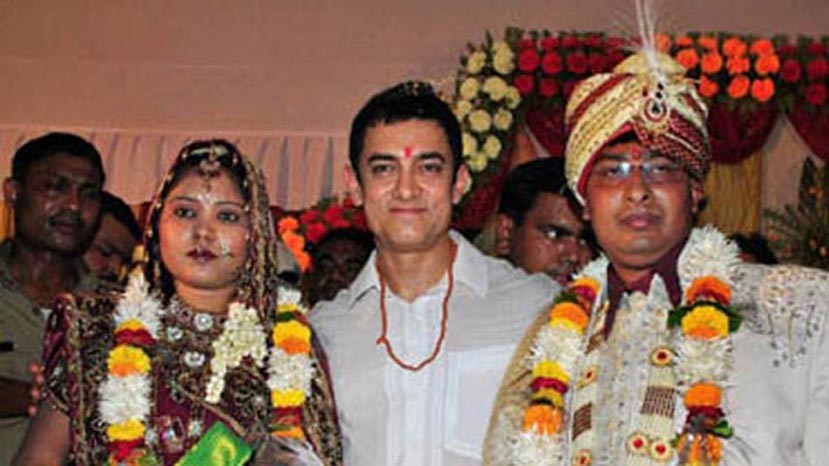 Bollywood Super Star Aamir Khan made a surprise visit to Channarayapatna town on Monday to attend the marriage of his trusted assistant Sudhakakar which was held at Hassan.

Aamir Khan was accompanied by his wife Ms. Kiran Rao and his in-laws. Kiran Rao wore a traditional saree was seen busily participating in several events of the marriage. The fact that Aamir Khan came all the way from Mumbai to Channaraya Patna , 160 k.m. away from Bangalore had even surprised the media men in the town who were surprised. Most of the TV Channel reporters who were caught unawares had to rush to the Marriage Hall to shoot the presence of the Aamir Khan couple. The actor stayed in the marriage hall and many film fans were thrilled to see the top star from Bollywood blessing his assistant.

Sudhakar who hails from Channarayapatna town of Hassan district has been working in Aamir Khan's office for more than fifteen years along with his father Kushegowda. Sources said that Aamir Khan and his family members were impressed with Kushe Gowda and Sudhakar's honesty, integrity and dedication to work. Aamir and Ms. Kiran Rao who hails from Bangalore did not want to miss out attending the marriage. They flew from Mumbai on Sunday evening and stayed at Haassan on Sunday night. Then reached Chennarayapatna at 12.00 Noon today and went straight to the marriage hall. The people of the small town were literally thrilled to see Aamir Khan.

A thrilled Sudhakar and his wife Mamatha were excited and thrilled to see Aamir Khan and his wife attending the function. Sources said that Aamir Khan has donated a car valued at Rs. 15 lacs to his assistant Sudhakar. Kushe Gowda who is also working in Aamir Khan's office was quite excited about the presence of star Khan couple and revealed to the media persons attending the functin that the actor had even financed the construction of a house to his son.