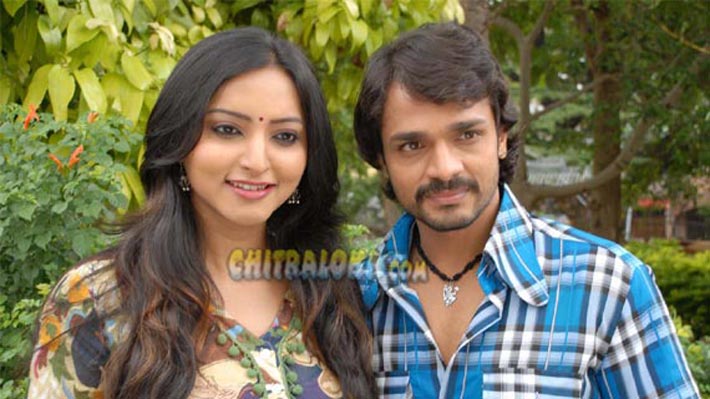 The audio CD album of Nagendra Prasad directed Vinayaka Geleyara Balaga was released a few days ago in a Jathra at Koppal where more than ten religious heads had partcipated . The film's major artists Vijaya Raghavendra, Meghana, Naveen Krishna and Petrol Prasanna were also present in the function along with Nagendra Prasad who is the director and partner in produciton of the film. More than two lacs people had congregated in the Jathra and the film was able to generate a good level of publicity.

However the film's audio was also released in Bengaluru on Saturday in presence of the media personalities and also well wishers of Nagendra Prasad and the producer. Veteran Journalist RG Vijayasarathy released the audio CD album and handed over the first copy to the film's hero Vijaya Raghaavendra. Later the discs were handed over to Nagendra Prasad, Naveen Krishna, Music director Hari Krishna and others.

Speaking at the audio release function, Hari Krishna said that since the film's story was related to the incidents twenty years ago, the feel of the music was also thought to represent that time. 'Therefore lot of discussions were made about how to compose the songs which were all situational based. 'The musical tunes, the costumes of the characters and even the ambience of the shoot should have given the same feel to gain credibility from the audience. Therefore the song composition work was more challenging. I clearly told Prasad that I would be taking more time to compose the songs and he gave me that time. For getting the sound from one particular type of Flute we have to search the whole south India and trace it in a village in Kerala.

Therefore it was lot of hard work that went into the composition of the songs' said Hari Krishna. Vijaya Raghavendra said that he has lot of hopes on VGB and was very happy with the way the film was made. "We had a special show on Friday evening and all the artists and technicians are in full praise about this film. It is an enjoyable film but you will definitely leave the theatres with a heavy heart. It is a very good film' said Vijaya Raghavendra whose opinion was echoed by Naveen Krishna, the film's heroine Meghana and Petrol Prasanna.

Nagendra Prasad said that the whole film was shot in a steady cam camera to get a right feel for the film. He said that his intention was to make a film which should have a feel of a period two decades ago and which should make many people nostalgic about the days spent during that period. 'I am happy that I was able to recreate that atmosphere in the film. Harikrishna has done an extra ordinary job as a music director. All the artists who were selected for the film have done a fantastic job' said Nagendra Prasad.