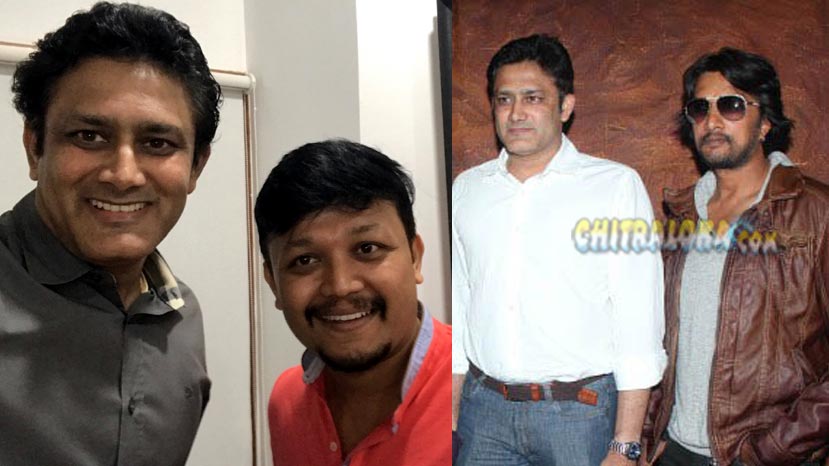 A long list of biographies are being made about international cricketers in Hindi. From Sachin Tendulkar to Mohammad Azharuddin, Mahendra Singh Dhoni and now the upcoming film on Kapil Dev, there have been many. In Sandalwood however, sporting biographies are absent. However cricketers of Karnataka origin are not averse to Kannada films. Some of them have acted in Kannada films too.

Legendary batsman GR Vishwanath acted in the film Navatare starring Kumar Bangarappa. The film was about a sportsman and the character of GRV was also of a mentor. Syed Kirmani acted in two Kannada films including Deadly 2. He has also acted in a Hindi and a Malayalam film. Three Karnataka cricketers, Sunil Joshi, Akhil and Aiyappa acted in a song in the film Ee Preethi Onthara. More recently Venkatesh Prasad played a major role in the film Sachin-Tendulkar Alla.

All this recollection is because Golden Star Ganesh met Jumbo Anil Kumble on Tuesday in the cricketer's office. There is no official version of why the meeting was held. Is Kumble acting in a Kannada film? We will know shortly.

Kumble has revealed recently on Vishnuvardhan's birthday that his current favourite actor is Sudeep. The last Kannada film he watched was Hebbuli. Kumble has made it a point to wish fans on the birthday of Vishnuvardhan. Another cricketer who is a fan of Vishnuvardhan is Robin Uthappa who fondly calls Vishnuvardhan 'Madikeri Sipayi' in reference to his role in the film Muttina Haara.