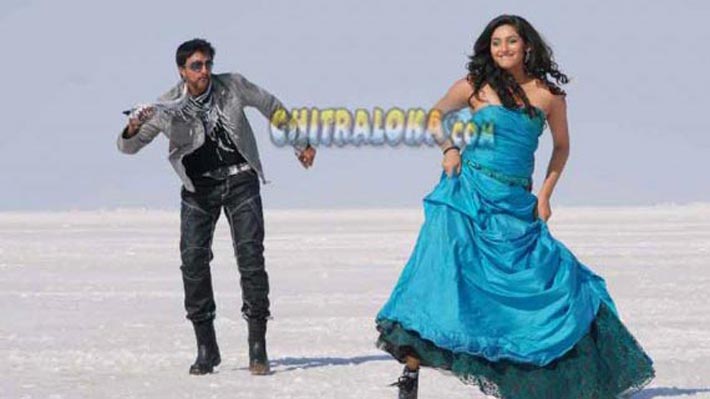 Encouraged the media and audience support for his latest venture, actor and director Sudeep says that the credit of the success goes to the entire team who had worked with him in the film.

Collections reflects th appreciation u al hv shown tarts KG..I'm glad my teams wrk is luvd..By doin so,u hv gvn life to many new technicians' says Sudeep in his latest tweet. Incidentally Kempe Gowda has broken a myth that remake films of hugely successful Tamil originals .do not run well in most of the centres including Bengaluru, Mysore, Mangalore, Shimoga and other centres. Now, both these centres along with Bhadravathi have become strong centres for star studded big Tamil films. Kempe Gowda's original film Singam and its Telugu dubbed version ran so well in Shimoga and Mangalore that no one thought Sudeep's film has any chance of making it in these two centres. For example, Singam had collected Rs. 4.5 lacs share in Mangalore and its Telugu dubbed version close to around Rs. 1 lac which means a large section of film buffs would have seen this film. That is precisely because Tamil and Telugu films attract 30 percent tax from its gross collections. But in the case of Kempe Gowda, the first week collections itself will be around Rs. 4.50 to Rs. 4.75 lacs, which is just a few thousands less than the collections of Puneet Raj Kumar's Jackie and Upendra's Super in single screens. KG has not been released in multiplex as Upendra's Super is still running well even after completing 100 days.

Even in case of Shimoga, the collections have been far superior despite the fact that Singam and its Telugu version Yamudu had run well. Except in Bhadravathi and Shikaripura , the film is running too well in Shimoga distribution circuit.

Singam and Yamudu had penetrated the Mysore distribution area so deeply that every person in the industry was surprised when a film distributor purchased the film on MG basis for Rs.1.01 crores.

Similar amount was obtained from KG producer Shankare Gowda for the North Karnataka area where nobody had any doubt about the recovery of the cost. (Sudeep's previous hit Veera Madakari had done a business of around Rs. 1.10 crores in that area), But the collections in two main theatres in Mysore- Prabha and Saraswathi has been extremely good and similar reports are coming from other centres like Mandya, Hassan, K.R.Pet, Malavalli, Chennarayapatna and other centres.

In that way, KG has broken the myth that remake films will not do well in Bengaluru and other centres which prominently screen non Kannada films. Since Sudeep's Kichcha Huchcha became a big flop and Darshan's Shourya ended up as an average flick, expectations were on a low key for KG. But with the satisfactory collections in Bengaluru despite getting released in a large number of theatres and extra ordinary collections in rural centres, the film is sure to go places in coming weeks. The competition seems to be less for KG till Darshan's Prince is to hit screens on April 1 or 8.