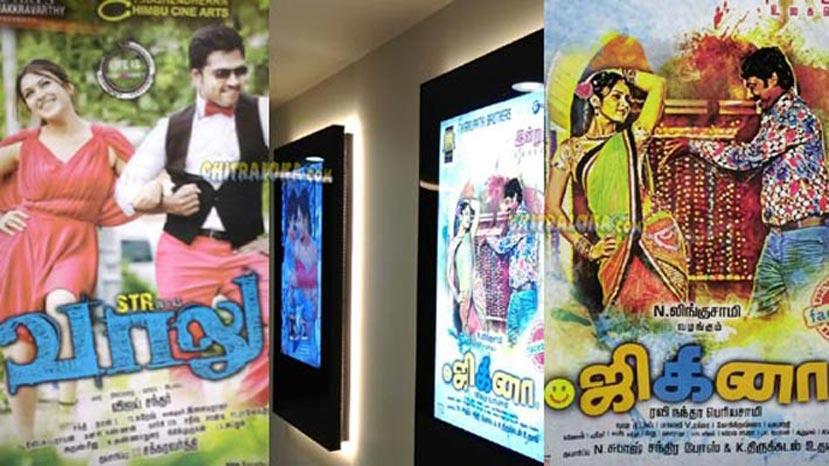 other language movie posters in multiplex

Kannada movie producer and actor Dr Nagesh Kaveti has written this article after his experiences at the multiplex. Kannada film fans taken for granted in the name of Democracy and Freedom

Last night I had gone to see a movie at ETA Mall, Magadi road, Bengaluru, Karnataka.

Since I had gone early, I was curiously going through the posters of other movies running  in that multiplex. When I came across the posters of Tamil and Telugu movies, I suddenly realised that I was not able to read the name of those films. I was totally confused "where am I"? In Bengaluru or in another place? In Karnataka or in another state? So many mixed emotions and questions passed through my mind.

As an ardent movie fan of all languages, am I not entitled to know the name of the movie in Kannada or atleast in a universal language ? Do I have to learn to read in other languages too? As a proud Kannadiga don't I have the right to know the name of the movie in the language of my state? Has Kannada and Kannadigas been taken for granted, no value? Where are the so many Kannada Associations? How is it that no body has questioned it? Don't we have the basic rights to protect our language? Where is Kannada and Kannadigas headed? have Kannadigas been sold and enslaved by other languages?  I felt disgusted , ashamed, humiliated and let down.....frankly my emotions and questions went far beyond the words I can write and express here.

We Bengalureans (Kannadigas) watch all movies and respect all languages too. Is it  wrong to expect the same basic reciprocal respect from other languages too. Karnataka and especially Bengaluru is one of the main centres in the film industry in India to make money. Probably no where else in India we can watch so many different language movies.

When I asked some authorities of the multiplex, I was told that it is a multiplex and they have the freedom to put posters in any language. The distributors have put the posters and nobody had pointed out about the posters.

I want to add that at PVR, few months back when I was watching the re-released color version of Kasturi Nivasa, I was shocked to see an advertisement of Cyska LED projected in Malayalam.

Dr.Rajkumars movie, the epitome of Kannada and advertisement in Malayalam???

Democracy and the laws of the country has to be respected and abided by all. But will the same be tolerated by other states and people too???

The views expressed in this article are those of its writer and Chitraloka or its publishers do not claim to endorse it. You can express your opinion to his e-mail - This email address is being protected from spambots. You need JavaScript enabled to view it.