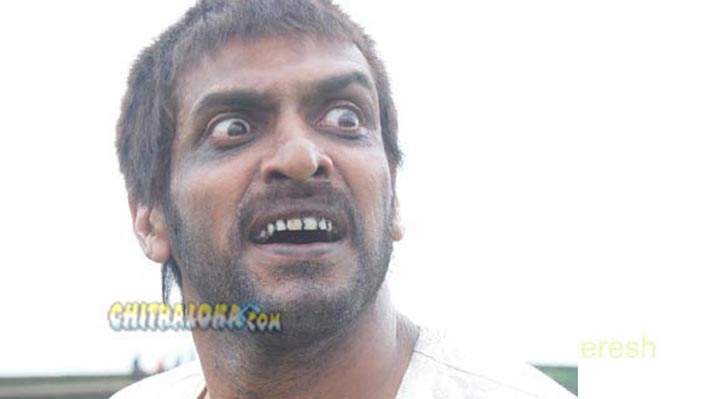 Upendra is one hero in the Kannada film industry who does not shy away from acting in roles with negative shades.  He has done many times before and has been continuing  with his innovative acting style in such films even now when he has attained the status of a big super star.

Upendra's two forthcoming films  God Father and  Aarakshaka have two different type of roles for him.  Infact  in God Father he plays three roles out of which one character is completely negative oriented.

Now, after looking at the wall papers of  Aarakshaka, there is a feeling that  Upendra will also play a role which has some negative shades in P.Vasu directed "Aarkashaka' which is a psychological thriller.

Is Upendra's character in Aarakshaka similar to that of  Soundarya in Aaptha Mithra? Soundarya plays the role of  Ganga in the film who is psychologically traumatised and whose problems gets cured by the combination  of a psychiatrist and a spiritual guru.  The character of Upendra as displayed in the advertisement that appeared in newspapers will definitely raise the level of curiosity about the film.  It also raises suspicion that Upendra's character may be similar to  Ganga's character in Aaptha Mithra.