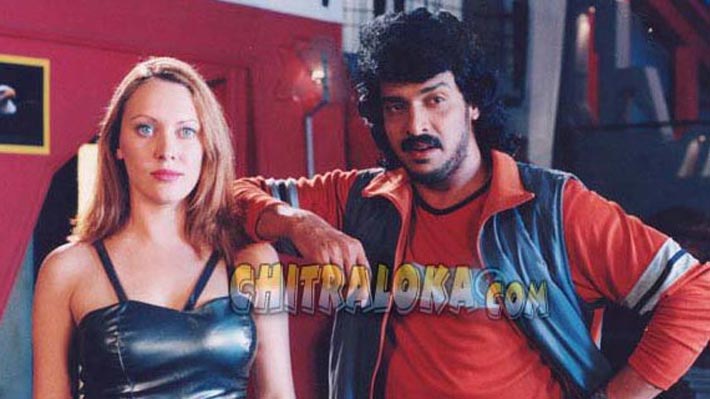 The eagerly expected Kannada film ‘Hollywood’ an opulently made film with a budget of Rs.7 crore is not as expected. There are exotic locations – a real feast to the eyes. There is Melkote Seenu (a Monkey) and three Upendras plus Ananthnag. The redeeming features of this film are very little. Director Dinesh Baboo easily takes the viewers for granted. He has not answered a few questions he puts on the big screen. What happened to the safety locker 164 that contained the chip? How did robot Upendra managed to function after just throwing the chip?

The script done by Upendra has got no earthshaking element in it. One Upendra is timid. He wants to win his lover. Another Upendra is fire in his attitude. He wants to produce a film in ‘Hollywood’ and get an Oscar. The heroine is behind this director Upendra. The timid Upendra in order to win the heart of his lover ask for the help of his boss. The boss immediately makes a robot Upendra. And the confusion starts. By the time everything is sorted with heroine Felicity the robot Upendra fights against goons and go in to pieces on earth when he comes in to contact with electricity. In between there is a monkey that is studying all the developments and the voice over for it (done by Ramesh Bhat) is only laughing element in the film.

There are all faces of Upendra. How does he look like in various mental make -up? Felicity is a mismatch. The photography is a classic part of this film. Ananthnag looks very funny. Pass marks to Melkote Seenu alias Lakshmi a monkey hired from Chennai. Remaining marks to actor Ramesh Bhat for matching the voice to monkey.

Mr Ramu the proud producer of Kannada filmdom – you have given a lavish film without working on the script and scintillating elements.